The Chapel at Rofenburg - part two 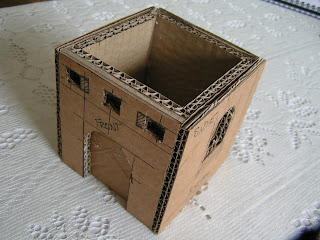 Both Sue and I have spent all day in the garden. No modelling today,  - instead Sue was sorting through some bean plants and I built two wooden troughs for planting vegetables, that is once we have some plants to replant and soil! Soil is the biggest issue as all of the DIY stores in the area have closed down due to the emergency. Our daughter Holly has volunteered to get some from the local allotments where her boyfriend has a large plot. Hopefully we can get some before the bedding plants are ready for sorting and planting out.

Back to the Chapel at Rofenburg.....

The corrugated cardboard walls were cut out with a snap-off bladed knife (my favourite knife is an 18mm snap-off bladed, heavy duty knife produced by Olfa, see this link) and glued together with my hot glue gun. It is obvious from the images above that there were even more amendments to the initial design (see marker pen lines). This is something that regularly happens with my terrain modelmaking. I am forever amending the design 'on the hoof'.

It is also obvious that I have used two layers of corrugated cardboard making sure to orientate the corrugations at 90 degrees to one another. A process that further strengthens the basic 'core'. 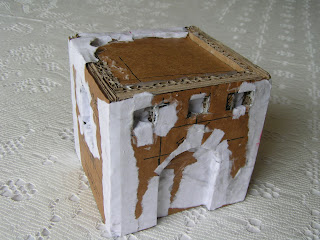 I then used torn newspaper (or in this case wallpaper lining paper) applied over PVA glue to both strengthen the box and hide the exposed edges of the corrugated cardboard. I have been using this particular technique for some years and can confirm that it produces very strong structures on which you can then add surface detailing or 'facing'. Normally I like to add at least two layers of the torn newspaper/PVA glue. Don't 'knock' this old school technique - it's simple to use, strong and in most cases free!

My aim when producing wargame terrain models is to cover every square inch of the model with some form of surface texturing even if this is just stucco. 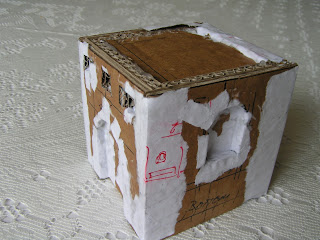 I added some more strips of corrugated cardboard to the inner corners  of the box (more reinforcements from scrap cardboard) and then glued a cardboard roof in place with the hot glue gun. The core is already very strong and stable.

Once again stay safe and

Having used this technique following the guide in one of your books I can confirm it makes for a very solid wargaming piece.