A quick update from my earlier post, after the brushes had been used, washed and allowed to dry naturally. The brushes are (from left to right) WHS Nylon/Acrylic No. 1, Citadel Standard Brush (the orange tipped handle), Winsor & Newton Series 7, No. 1, Rosemary & Co Series 401, No. 2 and No. 1.

The first thing I noticed was that the Citadel brush had not retained its point anywhere near as well as the others and that my 'much-used' W&N Series 7 ferrule could do with a good clean! In fairness the Citadel Brush has been well used and returned to a fine point after a simple dip in tap water. I will have to see about cleaning up the W&N ferrule before returning it to it's own plastic storage tube.

Not a very scientific survey, but I thought is was worth the update. 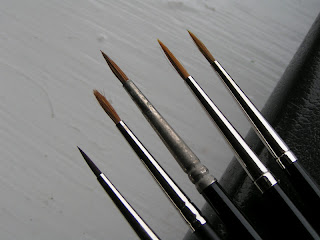 You can click on this image for a larger view.

I have found, that as a 'messy' figure painter and someone who will freely admit to serious brush abuse, that I have always felt a little intimidated by the Winsor & Newton Sable Brushes. Because of this I have in the past always reached for either a Citadel Standard Brush or a cheaper nylon/acrylic brush (as the WHS Blue Handled series) first. I would hope that I will now be a little more careful in the care and use of my new brushes, but only time will tell.

Once the weather warms up, I will write a more detailed post of how I find my new purchases.

Hmm, i've bought some moer W+N's lately and the wuality of them doesnt seem as it did a few years back. i wonder if the stockists dont look after them properly?