Last month I posted about my wish to take part in the Lead Adventure Forum miniature painting league, but decided that a smaller goal of painting squads or groups of miniatures during the whole year was a more realistic aim for me. The Pledge sets out my goal to model and paint at least 10 groups of miniatures between now and the end of the year. Month One is this group of Flintloque Dwarves, so far un-named, so suggestions very welcome.

Photo One - The bulk of the regiment will be converted Princess Juliana Chasseur Elite figures, for more details see this link To begin with I have converted six Princess Juliana Dwarves by adding Busby's modelled out of Green Stuff. The seventh miniature is a musician (also from Alternative Armies Flintloque range).

They are mounted on to 2p coins with the groundwork built up with Milliput and further detailed with sieved sand. 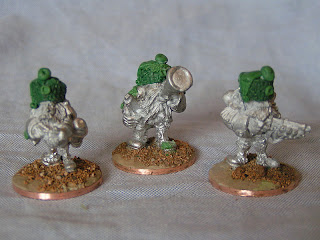 Photo Two - Shows all seven of the converted Flintloque figures. New headgear and some minor uniform details. The flag is modelled from a tomato purée tube, super glued to a new flagpole. The flagpole top is meant to represent a piece of Battenburg cake!

Regular followers will know that I usually model my Flintloque regiments with a minimum of eight figures and this regiment is no exception! 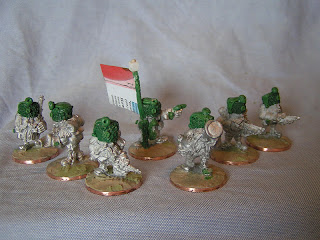 Photo Three - Model number eight - the regimental leader, a female Dwarf. The figure is a much modified Reaper Miniatures/Warlord figure 14524 - Valana, Forgemaiden which I picked up via e-bay.

I have kept the ceremonial hammer, added a Busby and 'Flintloque-ified' the detail and uniform to match in with the main regimental themes. 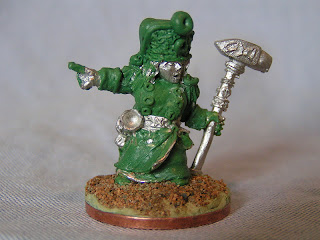 So far NO PAINT as I am still unsure as to the regimental name or colour scheme. Over the next couple of days I will undercoat and begin painting the flesh areas.

Further posts will follow soon with the goal of finishing this regiment before the end of February.

Can't wait to see this one painted.

Loving the dwarves in Busby's, I think this is the first time I have seen that!!!