This fantastic image has already been featured on Gavin Syme's new Blog but what has not been mentioned is that I was given the original illustration by Edward as a much appreciated gift.

I already have a number of original Edward Jackson sketches but this one is my favourite so far, illustrating as it does my creation - Foul Mouth Freddy. For anyone not familiar with the character - Feddy is a 'toilet mouthed'  Orc Sergeant serving with the Grand Alliance and featuring in many short stories and scenarios based around the Alternative Armies game Flintloque. Freddy is loosely based on Uncle Fred who is sadly no longer with us but hopefully these images, miniatures and stories give some impression of the loveable character.

A Limited Edition metal miniature of Freddy can be bought from AA, see this link for more details. 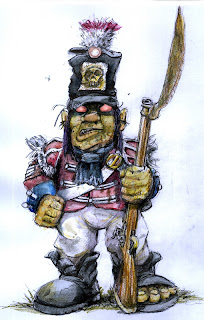 Thanks to Edward for sending me this original artwork. It is my intention to frame the sketch and have it hanging in my computer room.

I can also confirm that at least one new short story has been penned about this lovable anti-hero and if all goes to plan should be included in a book featuring Flintloque -based short stories very soon. I will post details once I have them.

Great artwork. That'll look good glaring at you across your computer room!

That is excellently done...

Fantastic artwork as usual, Edward was nice enough to send me the original drawing from my Toad Guard which was really, really nice too!!!

Lovely drawing with a very personal attachment for yourself, good work!

Very nice sketch. Thanks for the picture.