My own entry, The Imperial French Aeronef Le Louis Daguerre was not one of the three competition winners, but as you can see the entries were of a very high standard and I enjoyed this little bit of fun.

This early Dagurreotype image shows the only know contemporary image of the observation Aeronef while on station. It is believed that it was taken from Le Fee Verte while on a mapping mission over the great red plains of Mars. 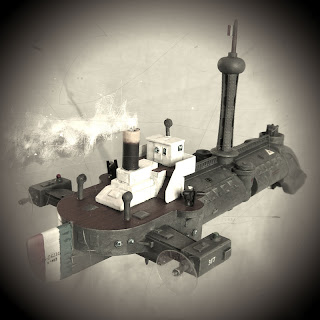 The competion rules (see here) state that there should be five images, three showing the finished model set against a neutral background, one set in a gaming environment and a final image of the unpainted model. Here are the five images I sent. 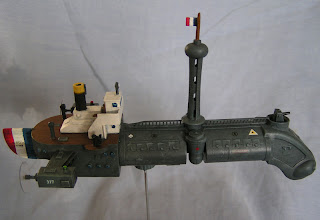 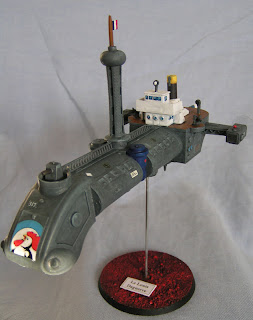 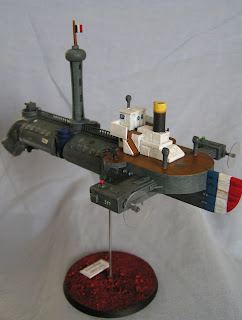 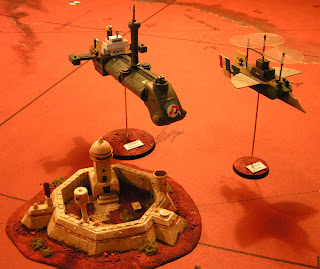 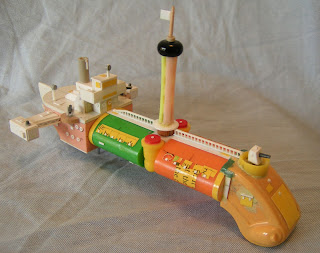 My plan is to write up a fully detailed building and painting log, but for now I thought that these notes would help.

The Le Louis Daguerre is an observation and Survey Aeronef built by the French Colonisation Force, Le Mons, Mars in 1899.

It is designed to house the experimental Dagurreotype imaging camera which uses huge 500mm x 500mm silver coated glass plates to map the wild expanses of the Le Mons area of Mars.

The Nef is designed to go for many weeks mapping the surface of the red planet and has four large chemical storage containers mounted in the central hull. The tall observational tower is designed for 360’ viewing of the Martian horizon.

After some attempts, primarily by the German/Prussian Aeronef force to capture this new technology, Le Louis Daguerre was retro fitted with a defensive armament of two Hotchkiss Revolving Cannons and one 90mm Breech loading gun.

The two main chemical containers are sections of the Juicy Drop Pop container the two smaller containers are from the same candy container – the yellow tops. The forward gun emplacement also utilises parts from this sweet container.

The bow (or nose) is an elbow joint from a transforming toy, while the main observational tower is a section of a hair curler topped with the head of a knitting needle.

The rear or engine area is built from various thicknesses of plastic card on a hull of heavy duty insulation foam. Most of the deck items are scratch-built.

Painting was done over a grey primer and using various acrylic paints and washes. The transfers (decals) are from various sources, but I should note that the main markings are hand painted.

The model is 190mm long, 90mm wide (widest point over the props) and stands 180mm tall (bottom of base to top of flag pole).

Thumbs-up for a wonderful scratch-built Aeronef!!

The only thing I don't like is the decal on the nose (sorry).

I'd have loved to see this 28mm scale instead though!

The competiotion had some great entry's, but i love yours (and i am not an aeronef fan as a rule). I also think that martian fort in the diorama style picture is excellent)

Where did that Martian fort come from? Another creation of your fevered imagination?

I might have to swipe it one of these days. The design/idea of course, as I doubt I'll get to Swansea anytime soon. THough I do want to make it to Wales one of these years.

Fort Kell Ben, named after a neighbour of ours - Ben Kell) was built some time ago following a paper model design by SquirmyDad (remember him?)

The design is re-scaled to 6mm scale and then added too before painting. I am sure that it has featured on my Blog before.

Love the fort too, I hadn't seen it before either.