The Pledge for April is now complete. The 1st Moldsk Guard (LEU 02) from Alternative Armies - well at least eight of the 16 miniatures from the set are now varnished and flocked. 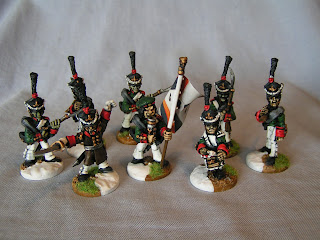 Photo Two - My imagineered Flag, based on some historical Russian banners, but using Halloween colours - Orange and Black to add some Undead flavour. The black skull motif is from Games Workshop, highlighted with dark grey acrylic paint and the eyes repainted orange. 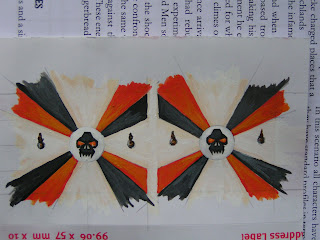 Photos Three, Four and Five - Show the Standard Bearer in greater detail. The miniature has been extensively modified with an added blunderbuss and a re-modelled left arm. 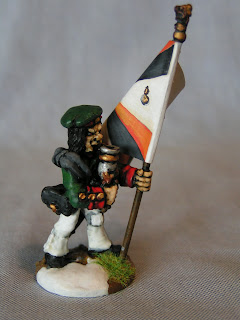 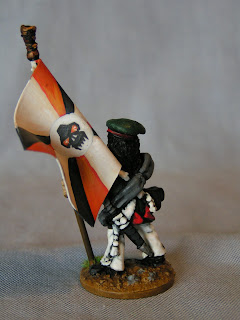 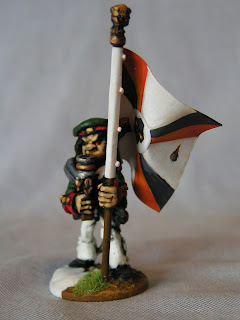 Photo Six - The three command figures. Since the last post, I have finished the metallic areas and varnished the miniatures with Ronseal Gloss Varnish and two coats of Galleria Matt Varnish. One tip that I have found works; is to repaint the pure white areas after the Ronseal Varnish has dried as the varnish tends to give an off-white finish. The Galleria Acrylic Varnish does not have this effect. 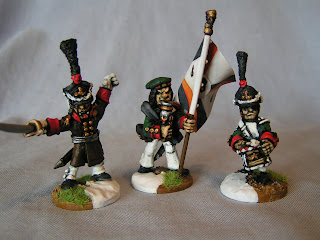 Photo Seven - There are five foot soldiers in the group - each mounted on to a 2p coin. 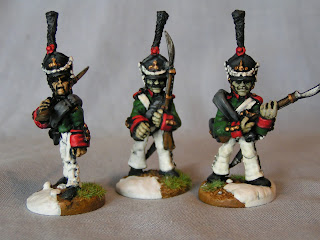 Photo Eight - I used this Osprey Leaflet for painting inspiration and to confirm uniform colours. 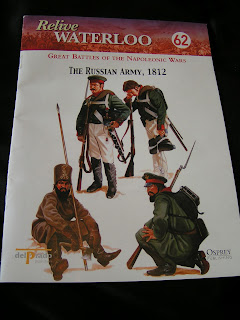 Photo Nine - The finished Group of Undead Bog Orcs. As a regiment, I think the colours and painting works well (particularly the flag - which is a sticky-backed white label stuck over a small square of Tomato Puree tube). I am still not happy with the flesh areas - but I think I will live with it. 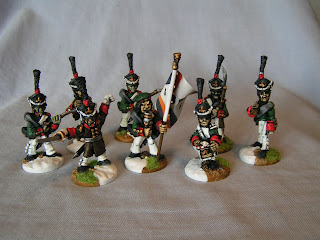 There you have it. Month three of my Pledge - to complete at least ten regiments before the end of the year, finished. Onwards to May's Pledge!

These look fantastic, you should be very pleased!

I really should paint my set!!!

Lovely work. The flag is superb.

esThese look good. Glad I picked up a set at Salute.