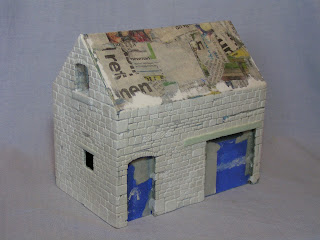 I used both the sketches I had made on site and some photographs of the building to add the individual stone blocks to the DAS modelling clay.

I have used a selection of tools to scratch into the DAS, for example; A scalpel with a No. 11 blade, a  large sewing needle, a dart and even a scratching tool which uses the blade from an Olfa circle cutter mounted into an Exacto knife blade. I should also add that the carving was done freehand without the use of a straight edge as I wanted to portray the rather haphazard techniques used in the building of the original kennel.

Further texturing was done with sanding sticks and a wire brush. I then sealed the stonework with some dilute PVA glue before taking these images. Please note this is was messy business and I regularly cleaned the workshop with my vacuum cleaner to remove the dust. 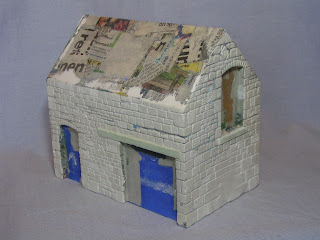 I have used scraps of green foam to add both lintels and the wooden beam over the main doors. These were glued in place with superglue.

Far from being monotonous, I find this technique rather soothing and with Radio 5 and The Ashes in the background I was able to get the carving done in two or three sittings.

Even more texturing was added by brushing-on some acrylic modelling paste to which I had added fine sand. 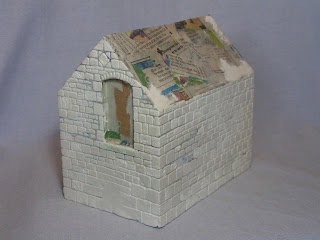