The Taming of the Shrew - RST 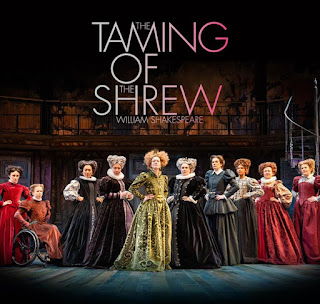 Last night Sue and I attended a performance of The Taming of the Shrew at The Royal Shakespeare Theatre, Stratford-upon-Avon but not any standard performance.....

In a reimagined 1590, England is a matriarchy, Babtista Minola is seeking to sell off her son Katherine to the highest bidder. Cue an explosive battle of the sexes in this electrically charged love story and offer a fresh perspective on the portrayal of hierarchy and power.

For further details see this link.

Sue and I had seen the same play back in 1995 (which stared Jocie Lawrence) but this production was very different - both funny (laugh out loud funny) and thought provoking as the gender swap has some dynamic inter-positioning of roles and meanings. But don't get me wrong it was one of the most enjoyable if not the most enjoyable performance both Sue and I had ever seen at the RSC. And that's saying something.

We stayed for the (very late) after-show question and answer session and once again loved having the intimate and informal chats with the cast and the director.

A great night out.