The Duc of Bunswicker swore an oath of revenge against the invading Ferach, that he and his troops would wear black until the 'Elven Devils in plumed helmets' had been removed and the beautiful state of Bunswicker was fully liberated. His troops, a mixture of Dwarves, Dogs and Ogres fought on many different fronts, using donated and stolen equipment, but always in their now legendary Black Uniforms with the White skull or 'Deaths Head' motif. They were a number of stories, true or false, that the Brunswicker's handed out some quite horrific retribution against any Ferach that crossed their path. 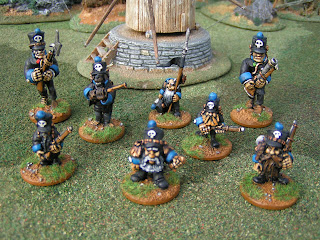 This particular regiment is led by a Dwarf of high standing (almost 4 foot), and a close relative of the Duc. Called the Lieb-Battalion, this group has fought mainly in the infamous Sauerkraut Wars against the Ferach allies or Finklestein Confederation.

The miniatures are a mix of Flintloque boxed and blister sets with converted shakos, cuffs and detail. The facing colour of Sky Blue was one of the most common used. The mixed elements of Dwarves, Ogres and Dogs is typical of this 'Free Company format'.