I was recently tempted to purchase a group of five Flintloque zombies from E-Bay. The group of painted and based figures cost me £2.99 (plus postage) and I decided to have another go at painting Ghosts (see earlier posts) and to see how quickly this group could be finished.

Photo One - Shows the group of six finished miniatures (I had an axe wielding zombie in my spares box - as you do!) 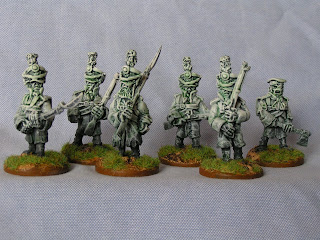 Photo Two - The rebased figures on 2p coins built up with Milliput. Note the use of 'green stuff' to add height to the plumes and thickness to the trousers. 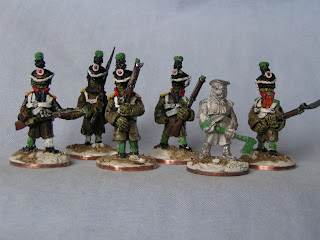 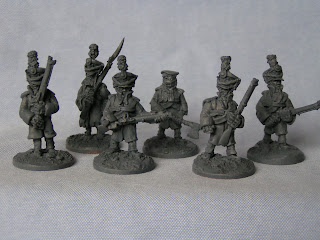 Photo Four - The first highlight, straight Stonewall Grey, wetbrushed (like drybrushing, but with more paint on the brush). 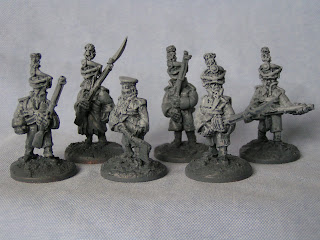 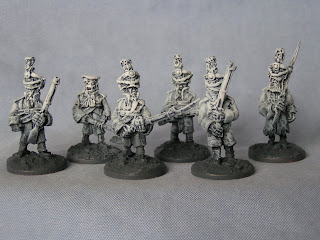 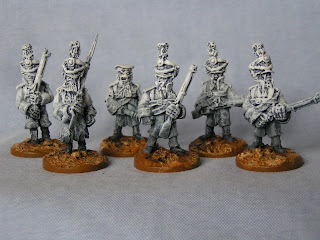 Photo Seven - After the miniatures were gloss varnished, I added some diluted GW Thraka Green wash, adding more to the top of the figures than the bottom and concentrating on the faces (or skulls).
The miniatures were then matt varnished (see earlier posts for details of my matt varnish recipe) and finally flocked with green static grass. 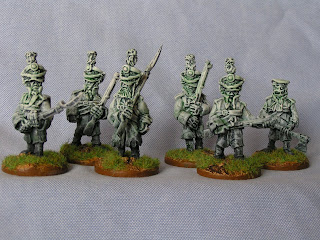 I estimate that, not counting the time I was waiting for the Milliput to harden, the paint to dry or the varnish to set - the actual painting time was less than fifteen minutes. In fact typing and preparing this post has taken longer.
Games Workshop Paths of the Dead miniatures have their beards painted a pale straw colour and some of the equipment or metal highlighted. I was tempted to do the same, but then this group of Ghosts would not have fitted-in with the earlier miniatures. "So there you have it a group painted in so little time, but still acceptable for the gaming table."
Tony
Posted by Tony at 07:23

Thanks for sharing such a nice information about to the Flintloque zombies.Especially i like these photo it is a great art.
Plastic Cards.