This regiment of Beervarian Line infantry are armed with the MkII Dwarf musket and dressed in the traditional bright blue coatees and boiled leather helmets, which invariably contain the soldiers most precious items, like clay pipes, beer steins and sauerkraut forks!

The regiment was previously led by Willy Hugzod, an Ogre of some standing, but following his death, is now relegated to a standard line infantry regiment - one of many such regiments commanded by the Kronprinz Earwig of Beervaria and part of the Finklestein Confederation. 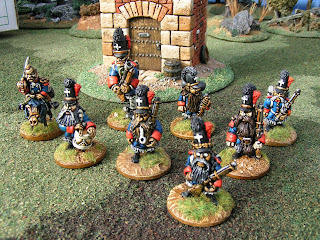 The miniatures are a mix of 1er Legion De Nain (52004), 1er Legion De Nain Command ( 52005) and a solitary Ogre. The mounted dwarf has been re-mounted on to a boar (LE009), the standard bearer given a musket and the Ogre converted from one of the Hun Ogres of Finklestein (56004) with the helmet built up from 'green stuff'. One final point is that the 'hammer' motif on the helmets has been re-modelled in to a cross.

The building in the back ground is a scratch built covered well, inspired by a 20mm/28mm Hovels building and constructed from carved blue foam.