My latest Flintloque miniature is in fact a converted Games Workshop/Marauder Miniatures Ogre.

Photo One - The completed Ogre, with a uniform based on a Saxon Light Infantryman, illustrated in Practical Wargamer. The model stands 43mm tall (base of feet to top of shako) or 55mm tall to top of feather and is mounted on to a 2p coin. 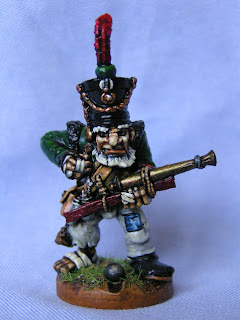 Photo Two - The second-hand Ogre, bought from E-Bay for £4.54. I believe the figure was part of the Marauder Empire Ogre range. 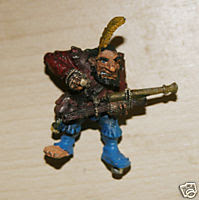 Photo Three - The same figure after 24 hours in a bath of Dettol. The paint comes away from the metal in a film or skin and is best removed with a tweezers or scrubbed with an old toothbrush. 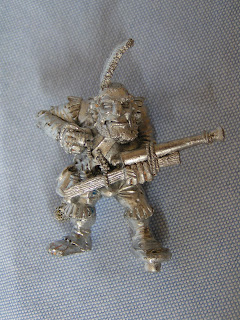 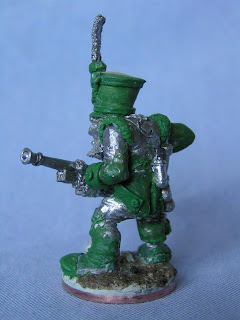 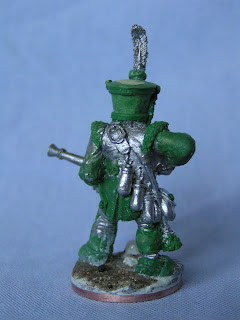 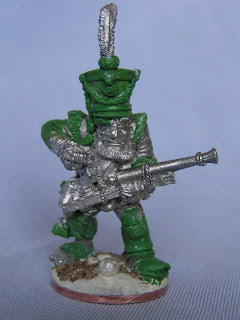 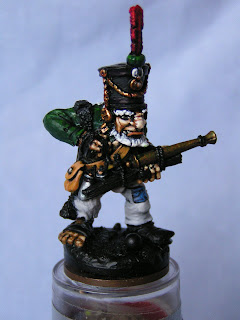 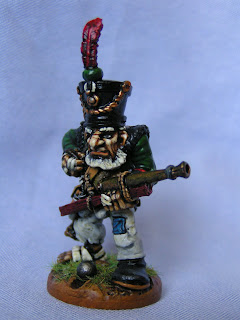 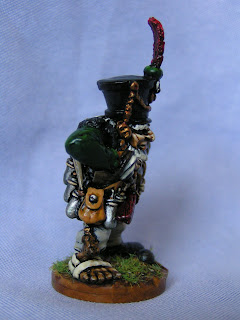 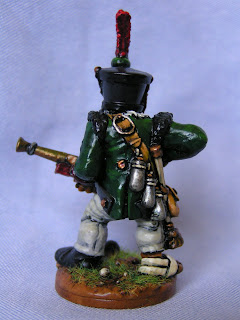 The idea is not original, I first saw this particular miniature converted for Flintloque, some years ago at the Comix Shoppe, in Swansea. The owner/manager had done a similar conversion and painted his as a member of the Rifle Brigade.

The project has been great fun to complete, although very time consuming, waiting for each level of 'green stuff' to harden before going on to the next. The embedded cannon-ball is the head of a steel dressmakers pin, trimmed and pressed in to the soft Milliput, a feature that I have seen on a number of 54mm figurines and something that I have been wanting to try for some time. It seems to work well with this model.
Tony
Posted by Tony at 07:47

excellent mini. The conversion is incredibly convincing and wonderfully done.
Keep it coming :)

That is some darned good work. How come you aren't sculpting your own minis for sale?

I think it comes down to one thing....

Maybe in the future.

Tony: You needn't lack for confidence. Just look at some of the utter dreck being produced by some companies, and compare it to your own stuff.

You really ought to consider it. Good stuff, and I don't even like Flintloque.