Within mixed race regiments or groups - Dwarves, Dogs and Ogres for example, there has always been an issue of enforcing leadership. The Duc of Brunswicker realises quite early on that his 'Free Companies' would require either a very strong willed character or a brute to lead his troops into battle. The answer was to raise through the ranks, Ogres with anything like intelligence (or a big stick) to lead these mixed race groups.

One of the most notorious was Tilty, an Ogre who dominated his associates with a strong jaw and huge 'mutton chop' whiskers. Placed in charge of the 2nd Brunswicker Battalion, Tilty was well know for his snappy dressing, huge moustache and strict discipline. He wore with pride the 'Deaths Head' and all black uniform and was known to lead charges against the enemy as well as severely dealing with any break in the discipline of his own troops.

Photo One - Shows the finished miniature, beautifully attired in his dress uniform and full breast of medals. 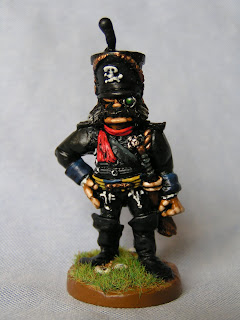 Photo Two - The bare miniature, showing the amount of 'green stuff' that was needed to complete this conversion. I wanted an imposing figure with a unique look and choose to base this figure on an illustration in Richard Warner's book Napoleon's Enemies, by Osprey. The most difficult part was building-up the Shako! 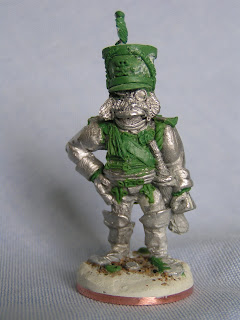 Photo Three - Yet another view of Tilty, a very well dressed Ogre. 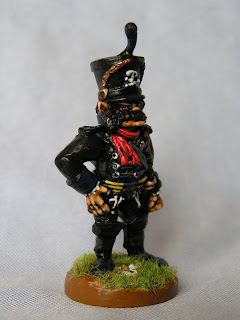 The model was great fun to convert and paint. How he will conduct himself on the battle field is still to be seen.
Tony
PS. The base miniature is the 1st Staff Detachment Ogre 56009
Posted by Tony at 02:39