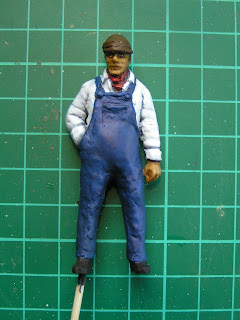 The second sculpt - another figure or workman in dungarees.

Image One - The figure was converted from another 1/24th scale plastic figure bought from e-bay. Here you see the finished sculpt alongside the original donor figure. 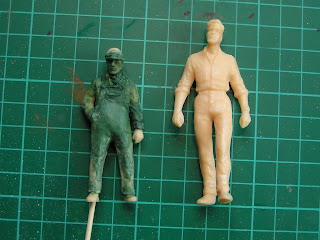 Image Three - After smoothing out the Green Stuff and Milliput, I painted the figure with some GW liquid Green Stuff before undercoating with grey acrylic paint. 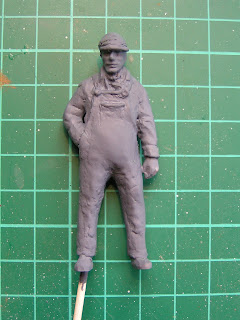 Image Four - The flesh areas were built up over Snakebite Leather. 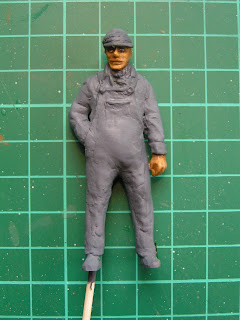 Image Five - The white shirt was painted over Stonewall Grey from Vallejo, then highlighted with Dead White. 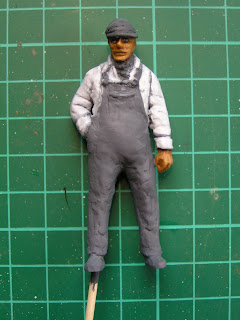 Image Six - The workman from the rear showing how the work clothes were sculpted. 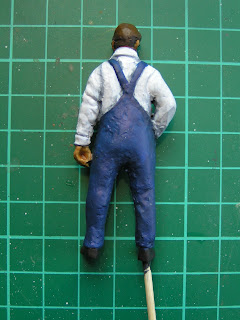 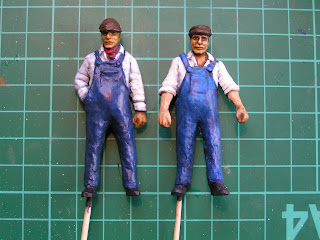 I have to admit that sculpting these test figures is very therapeutic. I would expect to do more, many more.....

Fantastic conversion, a real nice original figure you did make!

Because of this I have pulled out an old railroad modeler magazine that featured an early small layout by John Olsen (Railroad Modeler, January 1974, vol 4 #1). I'm seriously thinking of recreating this layout on On30. The original version of this was the end of the line of the Sagatucket River RR. It's more of a switching puzzle and I think my On30 equipment would be perfect for this.

I am aware of the 'Switching Puzzle' layouts and have been thinking about reproducing one for my own shelf layout. However I don't think I'll have enough room.

My plan is to upload some of the layout designs I have been working on soon.