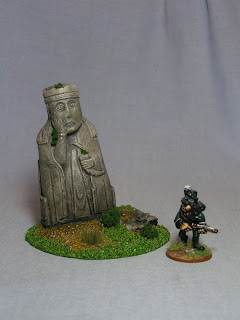 Earlier this year I picked up three plaster casts of the Isle of Lewis chess men. The casts were not very good, in fact they were miss-cast with lots of air bubbles and some serious damage. However I thought they were worth saving and here you see the first re-modelled statue, The Queen.

The Queen had the base sanded smooth and a was mounted on to a rough oval of 3mm thick plastic card. I used a small wooden chip and DAS modelling clay to add some interest to the plain base then sprinkled sieved sand and small stones over uPVA glue to texture the groundwork. 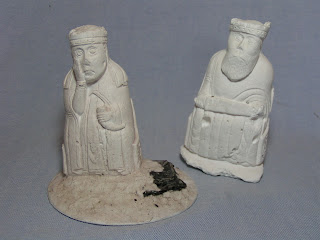 Image Three - I 'sealed' the plaster with some dilute uPVA glue. 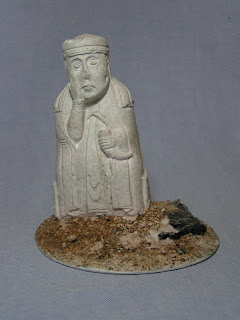 Image Four - The basecoat of grey, drybrushed grey was slapped on. 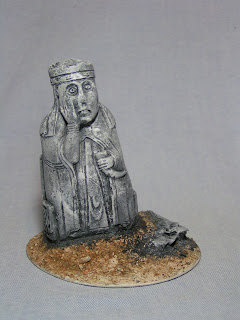 Image Five - The stonework was tinted with various washes to give the stone colour some 'life'. 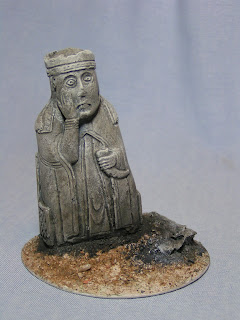 Image Six - The base was painted in my usual Snakebite Leather cocktail with odd stones picked out in grey. 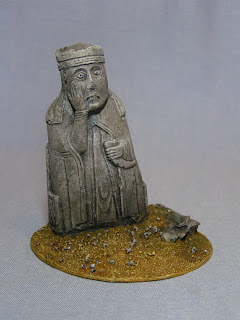 Image Seven - Then the base was decorated with dyed sawdust and static grass. 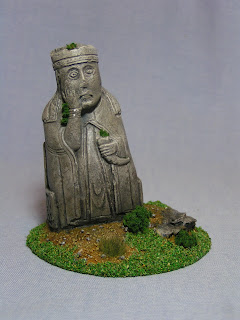 I think the newly based and painted Queen looks OK and considering the fact that they were destined to be thrown away - I believe that this is a win-win.

That's a great idea and has worked really well.

Very nice result and a cleave use of 'damaged / useless' casts.

As a youngster these where one of the first things I ever cast in resin and never did get the mix correct - it's possible that the red king is still sticky after 30 years!

What a wonderful idea!

They'd go very well with the pillars you made for me. :)