With the main groundwork painted and hundreds of small stones individually highlighted, I felt that the board was still looking too plain. I first added some dark green railway modelling hedges that were trimmed into 2cms - 3cms clumps or sections and superglued into small holes, then pressed in to the surface with a pair of pliers. These were situated near natural variations in strata and around breaks in the terrain (as I had noted from illustrations in American holiday brochures). Later I mixed up some mid green ground foam and after adding uPVA glue, some flow improver and a drop of distilled water, I scooped it onto one edge of the board in clumps of random foliage. Finally I added some tufts of long grass, which was cut from a broom head, bound with fuse wire and superglued into holes. This group of six photos shows the final effect. 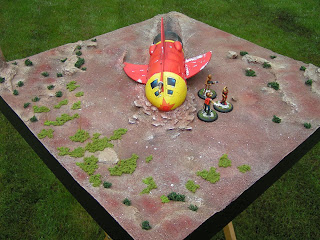 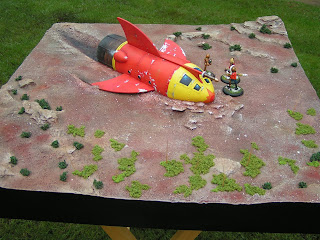 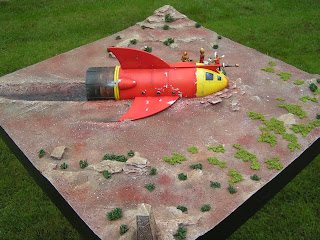 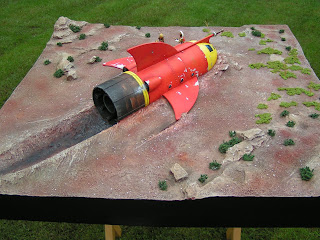 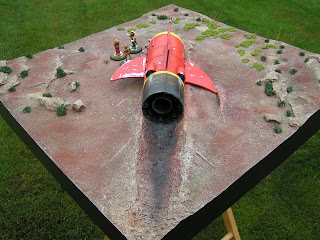 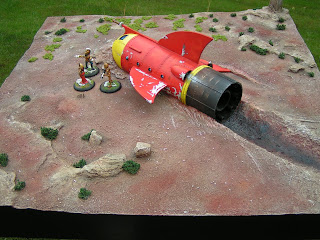 The board edges have been painted black and the whole board (minus the rocketship - which was covered with cling-film) was airbrushed with Matt Varnish. 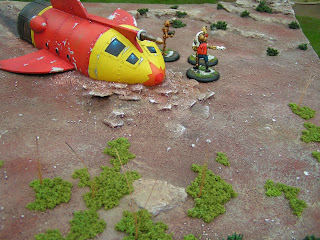 The terrain board is 2 foot x 2 foot and to give an idea of scale the miniatures are 40mm tall and mounted on to 40mm round bases. 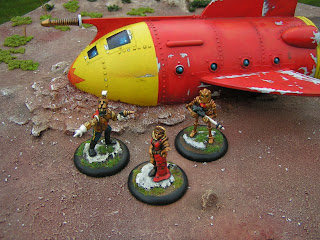 Throughout the construction and painting of this board there was one big question. Should I permanently mount the Rocketship, or have it removable? In the end I compromised and the completed Rocketship is mounted into the board but with the minimum of uPVA glue and the smallest amount of DAS modelling clay. If I ever want to remove it, I believe that I could, whether I will is a different matter altogether!
The board was finished well over a year ago and has, so far only been gamed with once. For me the whole project was about the modelling. I have even thought about selling it, but in the end think this is one board that I will keep as I feel it is just full of character and suits my Flash Gordon collection so well. It is also the heaviest terrain board that I own and the thought of transporting it without damaging it, is quite horrendous.
I would hope to have one more entry in this series - maybe a game report - but don't hold your breath!
Tony
Posted by Tony at 11:36