I recently picked up this seven DVD box set called Samurai 7. A Japanese Anime series from 2004, produced by Gonzo and based on the Akira Kurosaw movie Seven Samurai. The series was directed by Toshifumi Takizawa.
There are 26 episodes over the seven discs and I am halfway through the second disc and really enjoying both the story and the fantastic animation.

It should come as no surprise that the re-worked sci-fi setting is based very much on the original Seven Samurai/Magnificent Seven movies, recounting the story of a small rice village that is harassed by bandits every harvest time. The bandits are now becoming more demanding and now taking women and children.

Three members are sent to the city to recruit the Samurai and the adventure begins. This illustration shows the seven samurai. 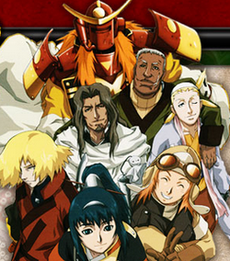 So far I would give the series a 7 out of 10 (no pun intended), the animation and story are very good, but the music and particularly the Japanese singing does grate!
Tony
Posted by Tony at 21:36