I wanted this particular miniature to be mounted on to a small plinth or display base. After much searching I decided not to use one of my ready-made wooden bases, but instead to use Lego building blocks!
As you can see in this first photo the figure has been superglued on to six, 8 prong Lego building blocks, which have in turn been glued together. The ground work has been built up with DAS modelling clay over white PVA glue, with the rear left area being sculpted into a larger rock for Hellboy to rest his right leg on. I sculpted the rock with a couple of metal sculpting tools and when fully dry used a scalpel blade to further detail the rock face. 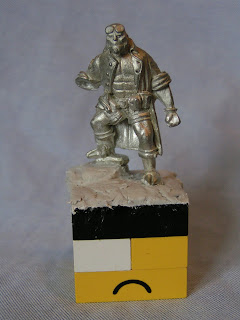 You can also see that I have modelled the DAS to overhang the sides of the Lego blocks, once set I sanded the sides flush and smooth. 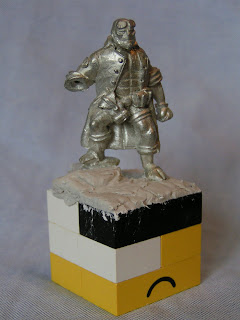 Once the sides of the plinth had been sanded and the groundwork detailed I added some small stones and fine sand to the centre of the base area. In this photo you can see how I have carved the rock or stone face with a scalpel and how the DAS groundwork now matches, seamlessly with the building blocks. You will also notice how I have not yet attached Hellboy's right arm, as this would have made sanding the sides difficult.
The sanding was done by attaching fine sandpaper to a toughened glass tray with double-sided tape and gently sanding in a circular action until the sides were smooth. 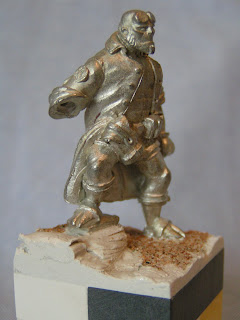 These photos do not show how fine, ready-mixed filler was used to fill the joins between the building bricks. I added some filler and white glue to the joins and when dry the joins were sanded - this took about three attempts before the fine joins were hidden.
Before undercoating I added some larger stones and a couple of pieces of broken cork with thin superglue and allowed the glue to fully set before starting the painting.
This is the first time I have used Lego blocks in this way - but am very pleased with the result and can see further plinths, and even sculpted or part plinths being used for future miniatures. I would recommend the technique to modeller's who want a 'custom base' for their display miniatures.
In part one, I mentioned how heavy this particular sculpt is - I now wish that I had added some ballast to the inside of the Lego blocks prior to gluing them together. If anyone wishes to copy this base building technique, I would suggest that you think about this earlier in the build.
Tony
Posted by Tony at 09:29