I have recently unearthed a collection of notes and illustration from the Victorian eccentric A. J. Copperthwaite who although ridiculed in his day has put forward a number of interesting and quite controversial theories and proposals, one of which is included below.
Stonehenge - a true description of the monuments original form and purpose dated 1858. (Click on image to super-size). 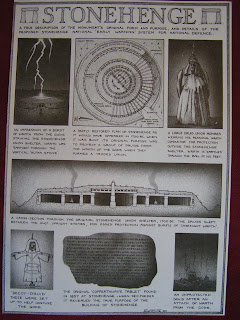 A further associated paper suggested using a much modified Stonehenge as the centre piece of a nation-wide early warning system in the event of an invasion. The Early Warning System was 'mothballed', much to the disgust of Professor, who did build a miniature version of the system on his Yorkshire estate, where marbles were shot in place of cannon balls and the 'enemy' was invading rabbits!
For anyone interested in seeing additional papers by Professor Copperthwaite, a selection of some of his works are available in a Scrapbook. Full details are;
The Secret Scrapbook of Professor A. J. Copperthwaite, The lost genius of English Architecture, edited by Alan Robertson and Michael Taylor and published by Grafton Books. ISBN 0-586-07043-5
Tony
I would hope that readers would find this illustrated paper of interest and maybe use these ideas in gaming scenarios or modelling projects.
Posted by Tony at 04:25