My intention is to build a group of three generic Flintloque scale buildings that can either be used as separate pieces or combined to make one larger or feature building as seen in these drawings.
The buildings will be built to accommodate the slightly larger Flintloque figures (approx 36mm - 40mm tall) and have a definite Spanish or Portuguese feel. Over the last couple of months I have been busy building 'masters' for a collection of 40mm AWI/ACW buildings that are now available from Grand Manner. However this series will be specifically designed and build with Flintloque in mind, although I would assume that they could be used for other 40mm historical games. 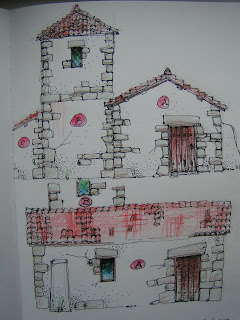 There will be three buildings;
Building A - 16cms x 10cms, the main building, with a large door to one end and at least one other door. The roof will be removable and there will be a simple interior. I am also planning at least one buttress, see illustration and a couple of simple window openings.
Building B - 6cms x 6cms, a two story tower about 13cms tall, with a door on the ground floor and four windows on the first floor. I intend having a lift-off roof with access to the first floor only.
Building C - 6cms x 6cms, a simple lean-too building with one door and a lift-off roof.
Each of the buildings will be modelled with a well-worn stucco finish and large stone blocks to the corners, the roof will feature half-round clay tiles. The drawing below features a Flintloque figure shown for scale. 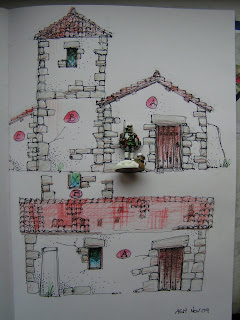 I intend working on these buildings alongside other projects, but will keep updating the Blog as to progress. I also intend having them cast in resin, (limited editions - exact number still to be decided) however this will only happen if there are enough pre-orders to warrant the investment in the rubber and resin. In the future I would also expect to build a windmill and some stone walls.
Any comments would be much appreciated.
Finally these building are totally unofficial and have no connection with Alternative Armies/Flintloque/Slaughterloo. It is an independent project that I am taking on as comments on this Blog, Flintloque based Blogs and private e-mails lead me to believe that there is a market for such buildings.
You now have notice of my intentions, estimated time to castings for sale - February 2010.
Tony
Posted by Tony at 05:15

Awesome plans ! You can put me down for a pre-order for the set right away !