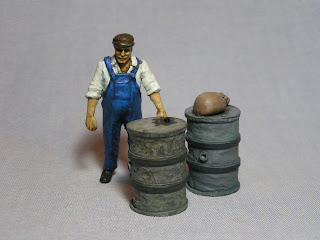 This time two resin oil drums - the European style oil drums with heavy central rolling bands. The models are resin casts of originals sculpted by me, for details see this post. Both have been aged or dented by attacking with a Dremel burr prior to painting. The rear drum has a Milliput two part epoxy sack added to the top. This was made from some spare Milliput I had left over after working on another project, I find that 'spare' Milliput can always be modelled into something like a sack or a canvas bag rather than thrown away.

Painting was done with acrylic paints and washes. Both were varnished with Galleria Matt Varnish before I used a graphite pencil to add a metallic sheen to the edges. The small oil stain was done with black and dark brown acrylic paint added to KLEAR floor polish.