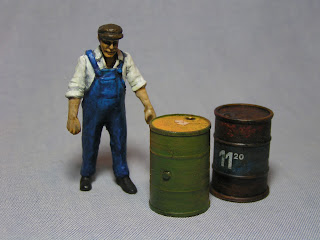 A pair of 55 Gallon oil drums.

The rust coloured oil drum is a yellow plastic toy that I picked up from a charity shop bin in Alcester, Warwickshire. It was only a couple of pence, but at 30mm tall and having a diameter of 20mm was an almost perfect 1:27.7 scale oil drum. I have no idea who made it or what it was originally intended for but as you can see it works perfectly with the 11mm = 1 foot workman. 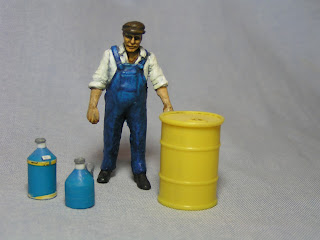 The second oil drum, the green and yellow one was scratch built by me. I used some aluminium foil food containers which were cut into a rectangular strip, later the strengthening ribs were impressed into the flat foil with a blunt screwdriver. Then after wrapping around a suitably sized plastic tube, I superglued the edges and sanded the join. I then used sticky-back plastic strips to produce the top and bottom rings. I glued these in place and cut the top and bottom to size with a scalpel, some plastic card was cut for the lid and base. Detailing was done with plastic rod sections.

Both drums were painted with acrylic paints, but using a make-up sponge instead of a brush to apply the colour. Weathering was done with more sponge applications and washes. The numbering on the rusted oil drum was found in my transfer stash (never throw anything away) and the SHELL Oil logo on the green oil drum came from a set of Scalextrix transfers I bought at a car-boot sale for 50p. 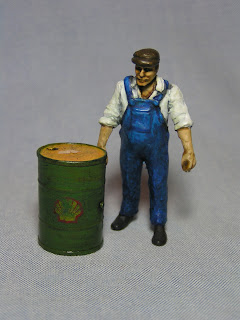 I have scratch-built a number of foil container oil drums, but this is the best. It is a technique you need to practice with before you get the effect you want. One of the advantages to making oil drums with thin aluminium foil is that they can be easily damaged, just use a paintbrush handle to 'prod' the foil and produce realistic looking dents.