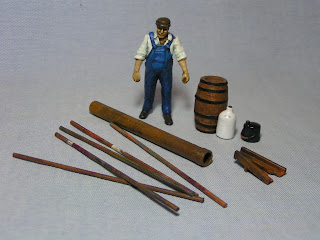 This latest update shows some more additions. Firsts, we have scaffolding poles; cut from 1.5mm plastic rod with the ends drilled out. I chose 10 foot long poles, but I am aware that these poles came in different lengths. They are painted in various rust/metallic colours and matt varnished.

The large metal pipe is a section of spare pen barrel which has also been painted in rust colours and matt varnished.

The additional pieces of clutter are; a wooden barrel (actually one of the cast resin barrels that I sculpted and have spoken about in earlier posts). Then there is a another enamel container (another item sculpted by me and available as a resin cast) it was painted white and gloss varnished. The small pot is a modified pen top with a florist wire  handle while the re-railing ramp was made from plastic card and follows a design I found on the Internet.

Details of the wooden barrel and enamel pot can be found here.