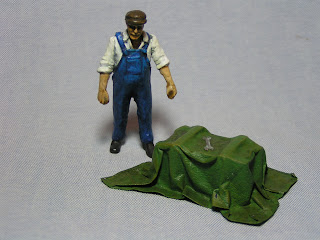 Making realistic tarpaulins from tissue. The inspiration for this particular post came from a magazine article by Brian Balkwell and published in Model Military International - November 2006. Brian suggested using standard tissues coated with water based silicone sealant to make realistic model tarps in 1:35th scale. I tried this using acrylic medium (used by artists to extend acrylic paints) but found that the tissue paper disintegrated. Back to the drawing board.....

I then stumbled upon some computer screen cleaning cloths. The small tissues are about the same size as a standard tissue but made from a thicker paper/tissue. I painted each side of the cloth with the acrylic medium and found that it was much better and able to be manipulated (see the last image). 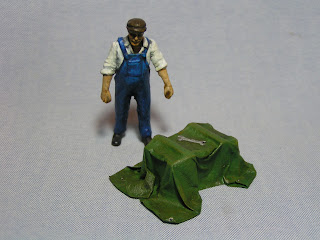 I then painted the tarpaulin with green acrylic paint. The model Tarp was then scrunched up and folds were added and taken away until I had a flexible tarpaulin. I cut the tarpaulin to a scale 10' x 8' and folded over the edges, about 1 - 1.5mm each side (as suggested by Brian). This was then pressed over a simple resin box to which I had added a couple of balsawood strips. I did not paint the box as the tarpaulin would be covering the whole model. I used superglue to keep the tarpaulin in place and pressed the model and tarp down onto a piece of toughened glass and left it until the glue had fully set.

When I was happy with the effect, I drybrushed the surface with lighter green acrylic paint and even added a couple of washes to highlight the folds (both effects were discussed in the original MMI article). For additional detailing I have added a plastic spanner from the Italeri Field Workshop Set and eyelets made by pressing a small hole in the tarpaulin and then using a silver pencil to model the metal ring. 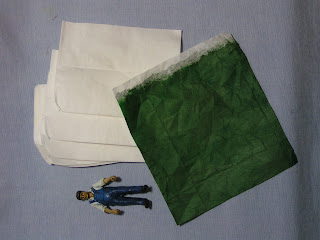 I am sure that I will be using similar techniques to make more tarpaulins on future projects.