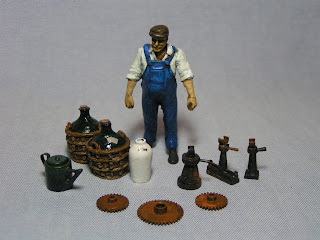 This latest update shows a wide range of different bits. The glass Demijohns are two that I sculpted and then had cast in resin. They have been painted with acrylic paints and the glass area has then been varnished with KLEAR, two or three coats to get the high gloss effect. The labels on the nearest one are just pieces of paper glued in place with PVA glue. The white enamelled earthenware pot is another sculpt by me, but in this case modified to have a tapering body. It was also varnished with KLEAR. Details of how to order resin copies can be found here.

The three lifting jacks were scratch-built following some examples found on the Internet, while the cogs were from an old cassette player (a great resource for bits and pieces of clutter). Finally we have an oil kettle - another scratch-build. The inspiration for this particular model was found while Googling Gn15 layouts. It is built from a pen barrel and a piece of plastic tubing (I think it was another pen barrel), some plastic rod and a strip of aluminium for the handle. It is painted with acrylic paints, following the usual process of basecoat, drybrushed highlights and washes before being varnished and then highlighted again with a graphite pencil.