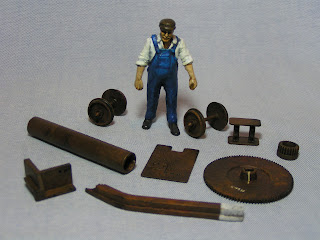 I would hope that you would find these two updates interesting. In the first image you can see a selection of bits that are in the main modelled from the workings of a transistor radio (the same second-hand radio that I used the speaker from, to mount in the brick base of the OSO Salt metal pan. See earlier posts for more details) and some items from my 'spares box'. With the exception of the metal wheel sets (picked up at The Severn Valley Railway for just £1.00) and the large pipe (a pen barrel) all of the other items are from the radio. I have used an old brush in a scrubbing motion and Vallejo Game Color Charred Brown and Hot Orange to apply the rust colour. Once dry I have washed the rust with a dark flesh wash and varnished the pieces with Galleria Matt Varnish.

In the image below, the pieces are also from the transistor radio with the larger flat section being the backing to the radio station finder, the angled piece from behind the battery compartment and the screw jack made from the screw mounting inside the main body of the radio. Once again I have used the Vallejo Color paints to add the rust colour, although I have used some Humbrol Rust coloured weathering powder on the larger flat piece at the front. This was applied over the top of the Galleria varnish with a large fan-headed brush that I keep for this purpose. 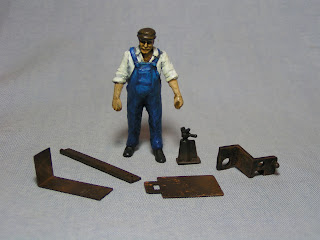