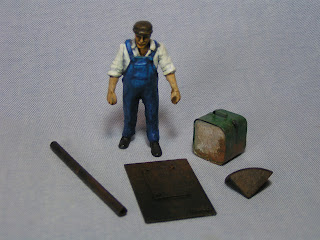 The strangely shaped oil can to the rear right was copied from a similar can seen at the Bewdley Town Museum earlier this year. I was not able to get close enough to measure it, so I have estimated the size and I think I may have made it a little too big. It was made by gluing layers of 3mm thick plastic card together and wrapping with aluminium foil. The handle was more foil and the spout was a short section of plastic rod.

The other items were from my scrap box or bits box. A plastic tube, a section of plastic card and the fender from a cheap toy tractor.

Painting was once again done with acrylics, then washes. I am conscious that the rusted items look a little darker in this post.