Wargames Illustrated, issue 265 - November 2009 is now on sale and on page 93 is yet another advert for Grand Manner featuring the 40mm AWI building - Guilford Courthouse.
The whole issue is themed around The American War of Independence with the majority of the articles featuring the AWI in some form or another. In general I would not normally recommend such a policy, however in this particular instance I feel it works well, very well. 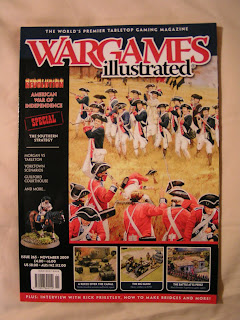 The Guilford Courthouse featured in the advert was painted by me some weeks ago and will be the featured building in a forthcoming TMP Workbench article. Expect the article soon.
I also feel that congratulations are in order - Dave at Grand Manner is celebrating his 10 years anniversary as a professional model maker, well done and best wishes for the future. Thank you for the support you have given me over the last six months.
For more details, please check out;
http://www.grandmanner.co.uk/home/index.asp?id=1
Tony