The rules of the Build Something Competition state that finished photos or images should not be included until the end of the competition. These photos show the model 95% finished but still awaiting a matt varnish coat and base mounted nameplate.
Photo One - The model nearly finished, mounted but still needing varnishing. 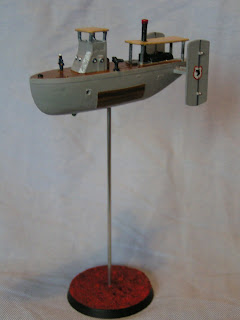 Photo Two - Painting started, a base coat of Stonewall Grey from Vallejo and Snakebite/Scorched Brown from GW. 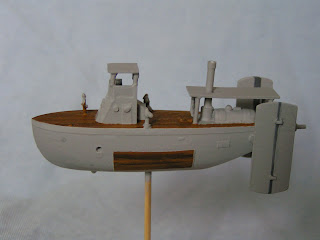 Photo Three - As photo one, but from a different angle. At this stage the model has been given a Kleer wash with a touch of GW Black Wash added to pick out the surface detail. The tail mounted shield design was from a 1/48th scale WW2 German set. 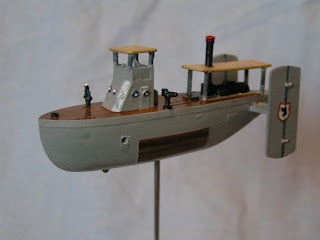 The model was produced on the 'spur of the moment' - prompted by the LAF's competition. If I was to plan this particular model or rebuild it, I would not have used the existing resin casting, but have scratchbuilt a more 'barrel-shaped' hull, less streamlined and slightly shorter. I might also have modelled the rear sun shade as an inverted 'V' or tent-like shape.
I also feel that this design would be ideal to replicated in 15mm scale, maybe using a toy boat hull as the basis.
I'll add more photos and details when the Build Something Competition ends.
Tony
Posted by Tony at 03:38