I have purchased five 40mm Continental soldiers from Front Rank, mainly to use as a scale comparison against the 40mm AWI buildings I have been working on. The first two were painted up some time ago as I wanted them to accompany trade show displays for Grand Manner. These two were sitting on my workbench, based and undercoated for some time before I picked out the paintbrush and painted them. They were finished and flocked last night. 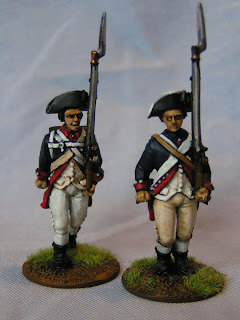 These are absolutely beautiful sculpts with perfectly proportioned bodies and subtle but detailed uniforms, a real joy to paint.
The bulk of the range come with a separate head and headgear sprue, which allows you to vary the uniform and add some tilt or turn to each characters head. The face detail is very well done - as you can see. At COLOURS, Newbury, last month I saw a full cabinet of painted figures on the Front Rank stand, regiments of between 16 and 20 models mounted on to square bases and four figures to a base. These are the same figures that Dave (at Grand Manner) has used in his catalogue shots - see; http://www.grandmanner.co.uk/shop/prodtype.asp?PT_ID=84&strPageHistory=cat
For the last ten years I have collected and painted a whole range of 40mm figures, Graven Images, Flashing Blades, S&S etc. I can honestly say that these are the best I have come across and have absolutely no hesitation in recommending them. For more details please go to; http://www.frontrank.com/5_lev2_40mm_AWI.asp
I am looking to purchase another group of British 'Red Coats' and I'll comment on these once I have them.
Tony
Posted by Tony at 01:23