The latest group to be added to my Flash Gordon collection are four Ethereal Guardians or Elders. Most Sci-Fi series have a benevolent ethereal being, think Star Trek, Star Trek TNG, DS9, Voyager, Babylon 5 etc. I envisage the group being parent-like characters, offering sage advice to Flash and Dr. Zarkov while being aloof and not wanting to get involved in day-to-day events (a bit like the Ents in LotR!)
Photo One - shows the completed group of four miniatures, from left to right; An elderly Ethereal, the group leader, a female and the juvenile. 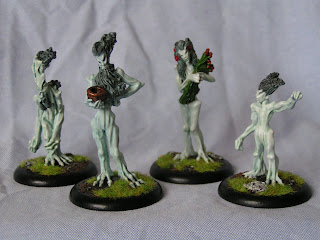 Photos Two to Five - each of the four models in greater detail. 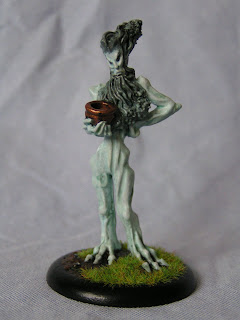 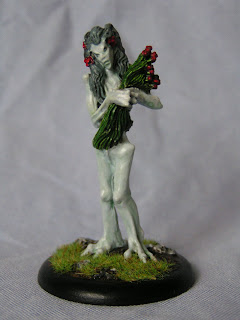 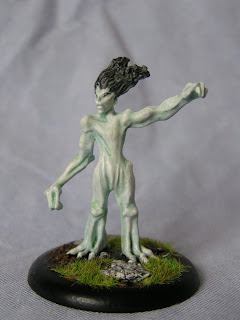 The miniatures are in fact Treemen or Ents from the Mithril Lord of the Rings range. They were purchased on E-bay some time ago and have been painted over a white undercoat with Vallejo Ghost Grey/White and the GW green wash. Each of the models had large and thick bases, that needed to be cut back and reduced in thickness, before being glued on to 40mm round bases. The bases were then built up with Milliput and detailed with small pieces of broken cork and sand.
The models range in height from 45mm tall for the juvenile to 62mm for the leader (foot to top of head).
Photo Six - Graven Images, Flash with the juvenile figure, shown for scale.

Photo Seven - Flash, this time with the leader and female ethereal. 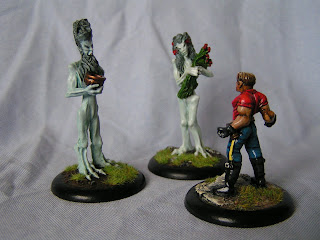 In my attempts to add to my 40mm Flash Gordon collection of figures, I regularly search E-bay for suitable miniatures, these Ents are one of my more unusual additions, but I think they work well, and the true test is whether the miniatures take on a life of their own - as these do.
Tony
Posted by Tony at 06:10