This is a 'straight off the press' photo of my latest E-bay purchase, a Grenadier Miniatures Orcus - M36. I know this particular miniature is rare, quite rare and I've been on the lookout for one for some time, after seeing one on a Grenadier miniatures site. It was purchased on an E-bay auction for just £2.99 (plus P&P). There are similar monsters sold in the plastic, D&D Miniatures range - check out Demogorgon or Aspect of Demogorgon.
I know that there are many Flash Gordon monsters with six limbs and although I am not sure this matches any of the Alex Raymond illustrations, I am still convinced that it fits well with the character or theme of Mongo monsters and creatures. 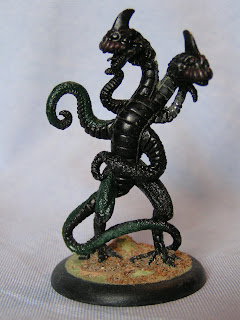 The miniature came painted - a dark green over a black undercoat. I have not stripped the figure but have mounted it on to a 40mm round base and built up the groundwork with pieces of broken cork, Milliput and sand.
The Orcus sculpt is very two-dimensional (moulded in one plane, I have already bent the lower, right tentacle forward to add some depth) but full of menace and will be a perfect addition to the Flash Gordon collection. The model stands just over 60mm tall (top of crest to foot).
I have a number of in-progress Flash Gordon Monsters, I usually don't post them on this Blog until they are finished, but with this fantastic sculpt, I thought I would make an exception and start a WIP thread. Expect regular updates.
Tony
Posted by Tony at 07:12

I remember that mini! I love the old Grenadier line! I can't wait to see the finished product.