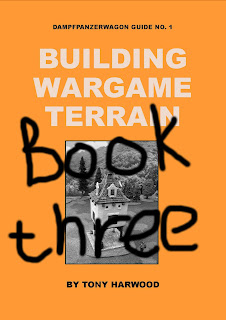 Various modelling projects have contrived to delay work on Book Three, but I can report that I have completed three chapters and am currently working on three more.

At this moment, I am again looking at a full colour card-covered A4 format very similar to the two earlier books. The bulk of the content will be articles and tutorials that have already appeared either in the modelling press or in On-Line magazine portals, such as the now closed Barking Irons Online. The tutorials will include detailed step-by-step images and text and will in most cases include both more images and better images.

Should the book progress - I am still not certain it will go to print, I would envisage a very limited production run, Book One and Book Two have sold over 700 copies between them, Book Three will be limited to less than 200 as I will need to fund the print run myself and although 'playing with' a separate Kickstarter project, (details to be announced soon) I am still not confident enough to use Kickstarter for this particular project.

Finally, if all goes to plan, the book should be available to order/purchase in early 2017.

I will keep you informed of developments.

I will certainly buy one, Cheers!

Well I will be looking to add book 3 to my collection.

You could run a pre-order system to know how big to make the print run... (I'll buy a copy as well!)

"You could run a pre-order system to know how big to make the print run..."

It is still early days, I'm still working on which articles to include, but yes - a pre-order system would be helpful.

I enjoyed the first two books.
So a third book, this is really great news.
Good idea pre-order system :)