May Day Treat - a new Airbrush and Compressor Kit 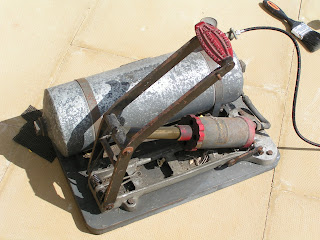 At long last I have moved into the 21st Century and purchased a new Airbrush Compressor and Airbrush. Up until today I had been making do with this DeVilbiss foot operated antique which although great for small projects has become a bit of a chore when trying to airbrush larger projects. 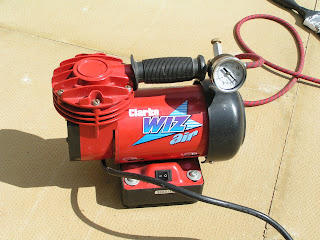 In addition I have this Clarkes Wiz Air which again is great for simple undercoating or base coats but just doesn't cut it when the airflow is so unpredictable.

I am now the proud owner of this little beauty. A TC80T Airbrush Compressor Kit from BARTSHARP, a 1/5th HP compressor with a 3 ltr Tank and A new airbrush purchased via e-bay for just £83.99. I have just connected up the various pieces and tried out the new (and old airbrushes) to check performance and I can confirm it works like a charm and much quieter than I had expected.

For details of how to order your own see this link. 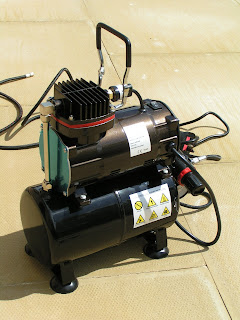 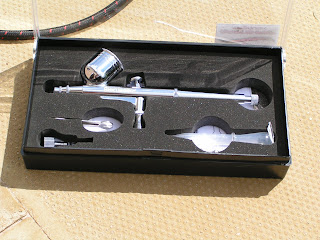 I decided to go with the compressor and airbrush deal/kit as the difference in cost was just £11.00. The image above shows the new airbrush model, while the image below shows my box of airbrushes and tools. Pride of place is the DeVilbiss A Model (black handle), but I have to admit that my favourite to use is the old faithful Paasche H (red handle) which I have had for years and years and years. 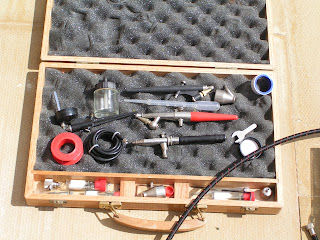 Hopefully this new purchase will mean that I will get around to more airbrushing projects. Stay tuned for updates.

... foot powered compressor? Wow, talk about dedication to your art!

Looking forward to seeing what you produce with the new tools.

Foot powered? When you described it to me the other day, I didn't think for a minute it was footpowered!

"I didn't think for a minute it was foot powered!"

Yes - foot powered. A real antique and quite difficult to use as you are pedalling and trying to airbrush at the same time, a bit like patting your head while rubbing your tummy!

I am looking forward to testing out the airbrush soon.