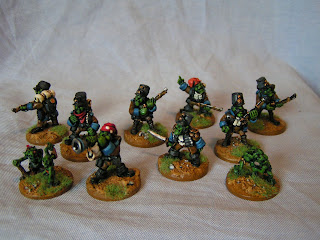 This article/tutorial was originally posted on Orcs in the Webbe way back in December 2012, but due to computer glitches and issue with OITW image hosting, the article and the images were lost to the Webb. I have reproduced the article here.


This group of Goblins was inspired by a recent e-bay auction from billybonesworkshop. I came across these beautifully painted Flintloque Goblin Cacadores for sale and thought that it was about time I painted my own group of goblins which had been residing in my box of unpainted miniatures for years.

I do not intend this short article to be a full painting tutorial or even a blow-by-blow account of how I have painted them, more an example of how a simple e-bay image inspired me to complete a long dead (and buried) miniature painting project.

I had a squad of eight Flintloque Algarvey Cacadores, some partially painted some mounted on to 2p coins and some just bare metal castings.  I even had some conversions – quite a miss-matched group. 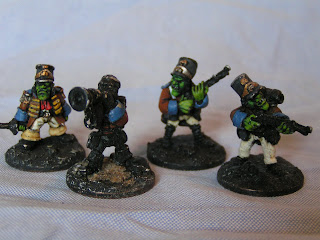 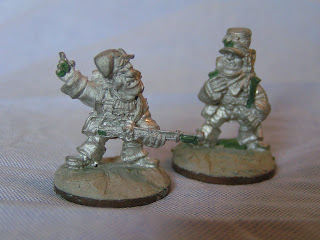 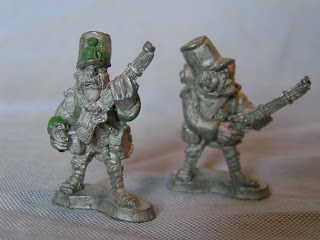 My first job was to properly base all eight and build up the groundwork with Milliput. In addition I searched through my ‘bits-box’ and pulled out some GW Snotlings (they maybe Wargames Foundry Goblinoids) and mounted these in two pairs on to 2p coins. The initial e-bay Goblins used a single Snotling mounted alongside the bugler and I thought I would copy this great idea. 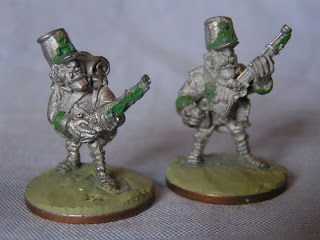 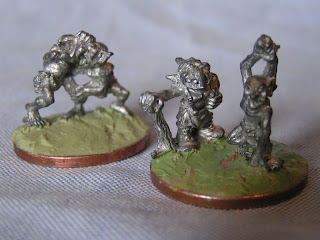 Base one (or the first 2p coin), has a couple of fighting Snottlings in a wrestling pose, while the second base has a Snottling with a sling and another standing with his hand on a club.  I can see me using similar style bases in future Flintloque projects. 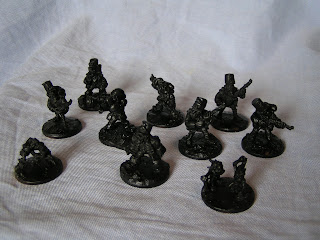 Once mounted I undercoated all of the miniatures with matt black spray paint and touched up any bits that I had missed with a large paintbrush and GW Chaos Black. 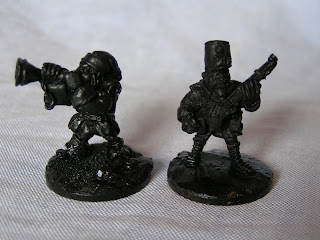 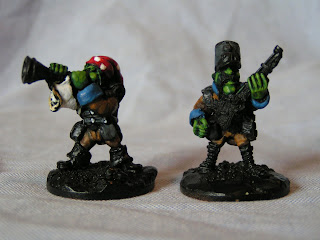 I used the e-bay Cacadores for inspiration and was soon painting the bright green goblin flesh with Foundry Forest Green (26A) and highlighting with Forest Green and Sunburst Yellow from the old Citadel Colour range. I am afraid I will be continually referring back to the e-bay Cacadores and apologise for this but I feel it is of interest to anyone following this tutorial to be clear on where I followed the colour scheme slavishly and where I deviated from it.  For example the e-bay goblins have their green flesh highlighted with white – which in my opinion gives a very ‘washed-out’ flesh colour.  I decided to highlight with yellow which I feel gives a brighter, more cartoon-like colour that fits in better with my Flintloque collection and is a style that I personally prefer.


The flesh areas were then ‘washed’ with the Citadel Wash – Thraka Green and once fully dry, I used the Forest Green/Sunburst Yellow mix to highlight the ‘high points’. For the bulk of the painting, I used a standard Games Workshop/Citadel brush. 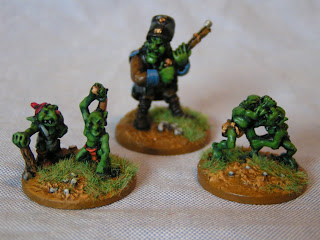 The next area to receive paint was the traditional dark brown uniforms.  For this I used Vallejo Charred Brown, highlighting with GW Snakebite Leather and even a small touch of GW Scab Red.  Even so I stopped short of a 100% Snakebite Leather highlight, preferring the uniform to be a little darker than the e-bay goblins.

The cuffs and facing colours were built up from GW Regal Blue and GW Skull White, but once again slightly less highlighted than the e-bay models as I felt I wanted my goblins to be less pastel and more primary.  I hope that you are following so far.

The boots were painted Charcoal Grey over Chaos Black, while the leggings were Charred Brown slightly highlighted with some Snakebite Leather while still allowing some of the Chaos Black to show through in the deep shadows.

Finishing off the figure painting, I used Snakebite Leather and some Charred Brown to paint the stock of the gun. The metallic areas were all GW metallic paints which I feel are some of the very best metallic paints available.

The whole group took about two evening of work to complete to this stage and given that they had laid for some time in my Flintloque miniatures drawer and sustained considerable damage, I feel that it was only fitting to resurrect them and complete this group in a similar style and in homage to the e-bay goblins.

Once varnished – a coat of Ronseal Hardglaze and then two coats of Galleria Matt Acrylic Varnish I flocked the bases with some static grass bunches over PVA glue. 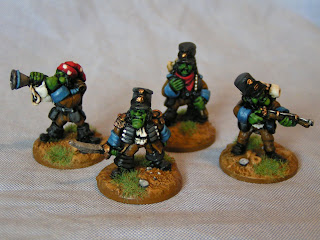 These Goblins had been relegated to my lead mountain and might never have been completed if not for the inspiration from the billybonesworkshop e-bay auction.  It is strange how certain images or in this case a group of figures can inspire you.  I would hope that this tutorial would kindle some inspiration and that you like my Goblin Cacadores plus see the humour in the two additional Snottling bases and maybe copy the idea the next time you are painting a regiment of Algarvey Cacadores!