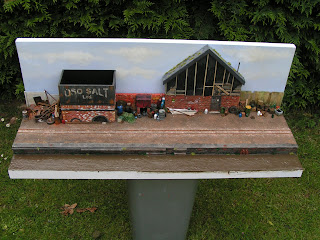 The canal basin was painted in a mix of dirty browns which were mixed on the model. I also added some dark green to the mix where it butted-up alongside the stone wall. The colour was copied from studying the local Worcestershire canals which show  a very unhealthy hue - a very murky brown.

Once painted I varnished the water surface with 3 - 4 layers of Klear (Future in the US) until I had a suitably glossy surface. 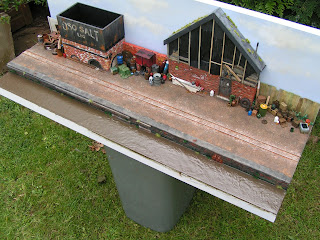 I have been asked; why I have built this layout this size and in this way? The answer is simple. I started this project with the intention of testing-out the 1:27.7 or 11mm = 1 foot on 16.5mm track scale/gauge combination and as it was a test I have used scrap materials or materials that have been donated or I already had in my shed. Up to this stage there has been very little that has been bought especially for the layout, the exception being the track (bought from Tennents Trains in Halesowen) and an Italeri kit of 1/35th scale field equipment which was purchased from e-bay.

If I were building a more permanent layout I would have used lighter materials and designed the track layout in a different form with a curved back scene.

I think of OSO Salt as an operating diorama rather than a true layout.