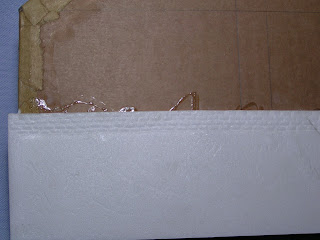 I decided not to use individual brick slips (as seen in the earlier posts and when building the brick base for the salt pan). Instead I have used 3mm thick expanded foam (the foam base from a frozen pizza) which was glued in place with both PVA and superglue.

The brick shapes were pressed into the plain foam using a modified paintbrush bezel which I had re-shaped with a pair of modelling pliers. The brick sizes are slightly over scale being 8mm x 2.5mm. There are many tutorials on the internet showing similar techniques for examples see this link.

You can see the effect in the image above and the customised tool in the image below. I found it best to add a sharp cutting edge to the impressing tool - this was done by using a rat-tailed file. 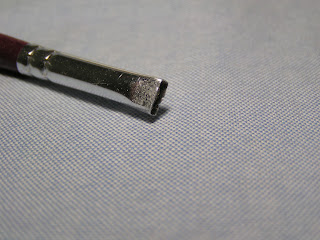 Once you get used to the technique, you can produce an impressed brick wall in double-quick time, easier than adding individual brick slips and also allowing you to add damaged or imperfect bricks. I mistakenly started from the top of the wall. If you are looking to copy this technique I would suggest that you start at the bottom layer or in this case ground level.