The latest post is more of an up-date rather than a full entry. The groundwork has now been completed. I have used two distinct grades - a rough stone scatter, picked up from a building site and a fine sand scatter. Both have been added over a coat of dilute PVA glue and further 'wetted' with a hand spray of water and dishwashing liquid. 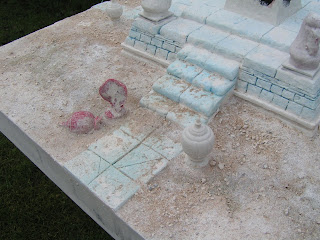 Photo One - shows the groundwork in greater detail. In addition you will notice the ornamental urns, which came from the same plastic game set that the horses heads statues came from, one of the urns was split into two with the aid of a hammer and chisel. The plastic pieces do not take glue or paint very well and I have had some issues getting either to stick. 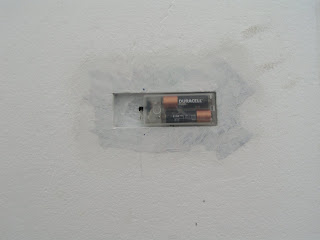 Photo Two - shows the battery housing built in to the base of the tile. The electrical lead goes through the base and up in to the plastic monolith. 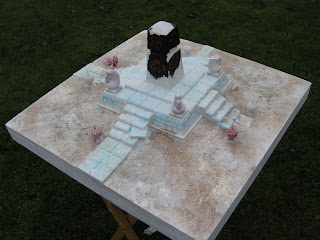 Photos Three and Four - show the board with all construction work finished. The next step will be painting. 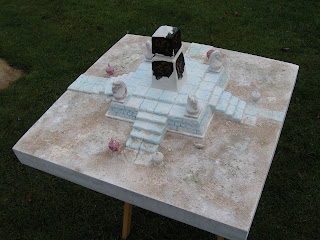 This is an amazing project you have going here. I have to wonder just how much time you have put into this and across how many days.

I often feel that I rush my projects and do not give them the time they really need to be done right. so, I am curious what sort of time others are putting into their projects.

Firstly - thank you for the comments, the whole project was planned to be started and finished by the end of the New Year holiday, so it is well over-plan.

So far today I have done no work at all on it and yesterday I spent less than 10 minutes. painting the stone areas (I am having to build up the base colour in lots of light coats or the paint peels off the statues and urns).

In the last week (starting painting) I would estimate that total time spent on the project is less than two hours.

Then total time on the construction (estimate) between 10 to 12 hours, all this over a period of a month. The sculpting work has been done while sitting in the living room and watching TV.

My figure painting projects are at a standstill, as the weather is just so cold and the water in my shed is freezing in the water pots! For the same reason I have not varnished any of the Flash Gordon figures I have completed.

This does help. I have never spent that much time on a project. I am always trying to get them done the same day I start them.

Part of me is afraid of pausing and having my attention turn to something else.