Allegiance - Neutral, I would expect both sides in this bitter Civil War to see a beer cart as neutral. Or, maybe not if they were very thirsty!

It is common knowledge that a Dwarf army marches on its stomach - its something to do with their short legs! But Dwarves will crawl into battle for a stein of beer and absolutely the most famous brewer of all is Bugman, his three X brew being the standard by which all other beers are judged.

Following earlier posts I knew that I just had to have a beer wagon to support my Dwarf Sauerkraut Wars collection and a quick Google/E-Bay search brought up the old Games Workshop Bugmans Beer Cart. The prices fetched by this out-of-production metal model are quite staggering and as I was uncertain that the miniature would work with the larger Flintloque Dwarves I decided to build my own.

Photo One - Shows the completed vignette of wagon draft-boar and brewer. 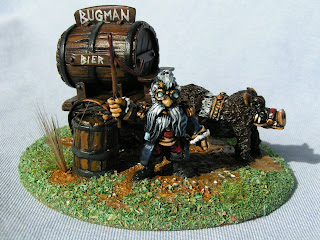 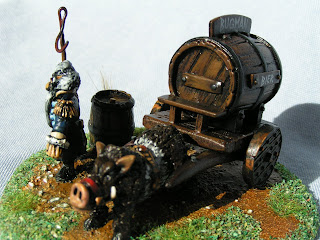 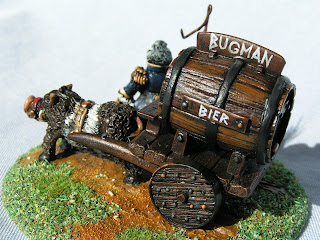 Photo Four - Shows work-in-progress on the cart/wagon. The barrel being a resin casting, actually two barrels cut-and-shut to make one, as the barrels had detail on the tops only. The Cart and yolks are plastic card while the wheels came from my spares box - Games Workshop Snotling wagon, I think. 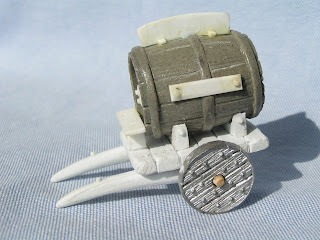 Photo Five - Most of the modelling has been completed, the AA boar has been bulked-out (it is fed on the very best brewers hops after all!) The wagon-master is the officer from the Landwehr artillery blister pack (52009). 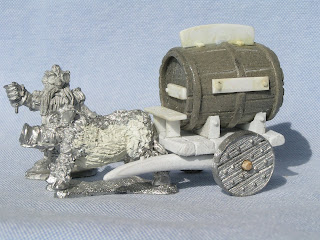 Photo Six - In this photo you can see how I had tried to build a small vignette, however I later felt that the base was too large and the barrel too big. I removed the boar and re-based it on to a much smaller base, see below. 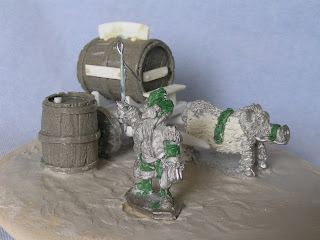 Photo Seven - The smaller base and barrel added to a thick plastic card base with the ground-work built up with DAS modelling clay. 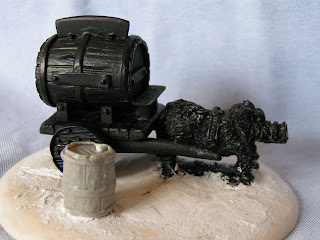 Photo Eight - The cart/wagon was temporarily mounted on to a cocktail stick (a small hole was drilled in to the base of the axle) so I could more easily hold the model during painting. Once completed the cocktail stick was cut off flush and the exposed end painted Black, Dark Brown and washed.
The Wagon was painted Dark Brown over a Black basecoat, highlighted with Snakebite Brown and some White and washed with Games Workshop Washes, Black and Sepia. The detailing is painted either Black, Grey or Rust colour and the lettering hand painted, first with Pale Grey and later pure White.
Once finished I washed the whole model with 'watered down' GW Black Wash. 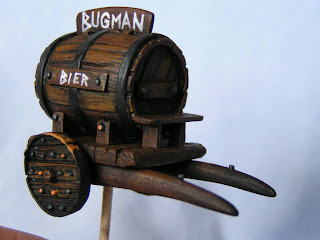 Photo Nine - I had once read that many wagon master during the Napoleonic Wars wore very bright and flamboyant uniforms, I painted this Dwarf in suitably bright colours. The boar was painted over a Black undercoat and the smaller barrel was painted in the same way as the wagon. 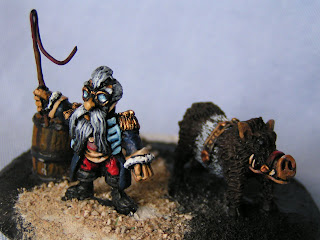 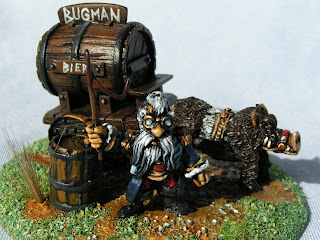 I would hope that AA/Flintloque modellers will forgive the cross-over of AA and GW backgrounds, as I really could not bring myself to name this beer wagon anything other than Bugman's Beer Wagon!
Tony
Posted by Tony at 04:02