Crashed Rocketship Terrain Board part one

It has been over a year since I finished this particular skirmish terrain board. I had intended submitting the whole article for publication in a magazine. However nearly a year on and it is still to see print! Rather than keep it to myself, I have reproduced the whole article as a series here on my Blog. I hope that you like it. 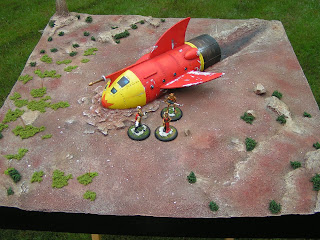 For some time I have been wanting to build a skirmish terrain board that features a crashed rocketship. By skirmish I mean a small, 2foot x 2foot highly detailed gaming board come diorama to show off my 40mm Flash Gordon miniatures. The idea was further defined when I saw a crashed rocket board at a local Games Workshop store in Dudley, West Midlands, the rocket to the centre and gently rising terrain in each of the corners. The rocketship had to be from my favourite period, Flash Gordon the Alex Raymond comic strip years. Later I was further pushed in to progressing this project by the release of Fantastic Worlds by Rattrap Productions. See Peril of the Mystery Ship, pages 93 – 98 of the rule book. 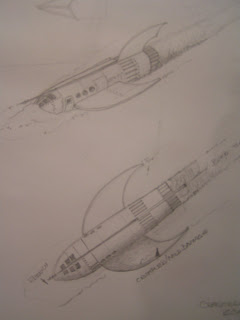 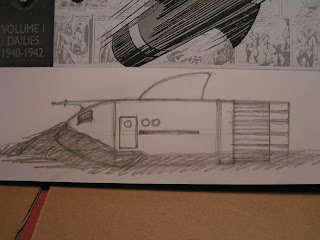 I studied web and comic book illustrations for the traditional ‘bullet with wings’ rocketship designs and sketched out a number of possible options, then when visiting a local ASDA supermarket I saw the perfect ingredients; firstly a plastic wine glass, then a small blue thermos flask and finally a Barbie doll plastic beaker. The wine glass had the stem removed and the base of the goblet re-shaped with filler, the thermos had the handle removed and the top cut off, while the Barbie doll beaker had the base removed. A bit of sanding and loads of superglue later and we have the nose, body and rocket engine section, an afternoon’s work and total cost so far of less than £4.00, a real bargain and a simple project.

The wings are 3mm thick white plastic card, firstly drawn free-hand then cut, copied and sanded to shape. More superglue and a couple of strengthening pins and the ‘flying bullet’ was ready for take-off! You will see from the accompanying photos how I added detail to the basic shape and design, sticky labels, plastic rod, plastic card, sliced biro pen barrels and dozens of thinly sliced plastic rod rivets. The sensor/weapon above the nose section was cut from a spinning top toy given away free with a breakfast cereal, then pinned and glued in place. 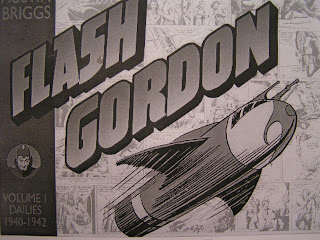 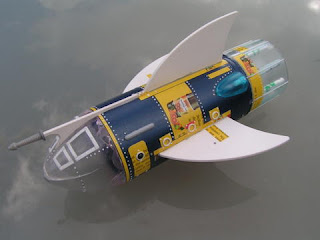 The photos do not show the detail to the rear of the rocket, eight biro pen barrels and a cap from a washing-up liquid bottle, superglued to the inside of the Barbie beaker.

Before starting painting I washed the model with warm water and washing-up liquid and then sprayed the whole thing with ‘makes paint stick’ an aerosol product designed to undercoat plastic garden furniture prior to painting. This was the first time that I had used this product, so far it has performed perfectly.

Painting was carried out with acrylic paints, the red being spray painted via an airbrush – a Paasche single-action H model (my old stand-by) and the yellow hand painted over a cream under-coat. At this stage I was copying a design that I had seen on the Internet. The rocket motor section was painted dark grey/black and the ‘sun design’ on the nose was hand painted, following a pencil line guide. When dry the rocketship was ‘washed’ with various red and yellow inks.

One of the most striking and controversial parts of the painting are the damaged sections, painted to represent chipped paint on a crashed rocket, the shape was roughly painted with mid grey acrylic paint and then further over-painted with a white/silver colour. Later a wash of blue and black ink/water was added and finally the nose-cone windows were painted black, then dark blue, mid blue and light blue before a small pure white highlight was added to the top corner of each window.

Panel lines were added by placing ‘post-it’ notes over the panels and drybrushing contrasting colours in the direction of flight, similar effects were added to the rocket engine areas, this time with metallic colours.

The finished and varnished rocketship then sat on the shelf for over two years! During this time, I have had to repair the wing and tail sections a number of times. 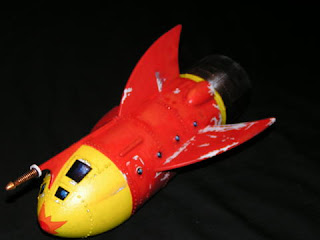 This photo, shows a Graven Images 40mm miniature of Flash Gordon alongside the painted rocketship and shown for scale. 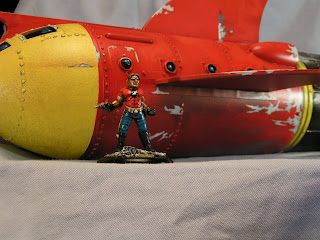 Part two will feature construction of the terrain board.
Tony
Posted by Tony at 17:45

Brilliant, love your use of materials, and the post it note for masking, is a great idea.

All the best Airhead

So glad you're back on the FG builds! Nice!