How to cast resin parts

My latest modelling project meant that I needed a set of sash windows, at least three of each size to produce a 40mm AWI building. Rather than build six fiddly window pieces I decided to build one of each size, make a mould and cast them up in resin. I am sure that I will use the mould again and so I spent some time producing a good master.
Photo one - shows the sequence in pictures, The white plastic/plastic card master, the mould and two finished castings. 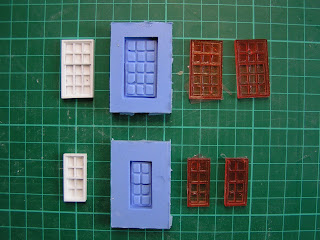 Photo two - the Lego moulding box and finished mould which was made from two part SILIGUM, available from craft shops in the UK (try Hobbycraft if you have any difficulty), you mix two equal parts of blue and white material and then press the pale blue putty in to the mould box with the master at the bottom. The putty will go off in about ten minutes, producing a silicone-like soft rubber mould, which is ideal for simple projects like this.
I use a piece of plastic card to press the putty on to the master and get a good copy. this should also get rid of any air bubbles in the mould or around the master. 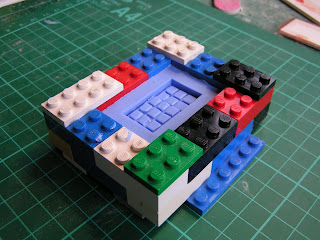 Photo three - no expensive resin products here! The Fastglas resin and hardener are available from Halfords. I mix the two parts together (usually too much and also more hardener than recommended) in a plastic cup, before pouring in to the mould. 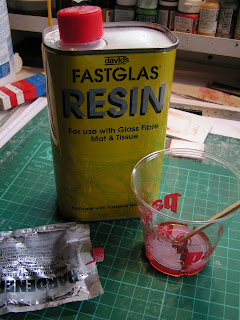 Photo four - the resin poured in to the mould. I do not use a release agent and once the resin begins to jelly, I place a piece of plastic card over the top of the mould and press down, forcing the resin in to the mould which also produces a flat back. 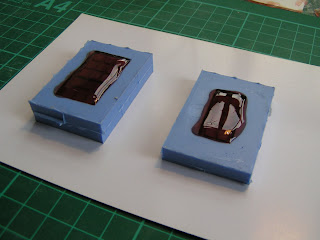 Photo five - as photo one, showing the technique in stages. The whole process; producing the master, the mould and two finished castings took less than 2 hours. 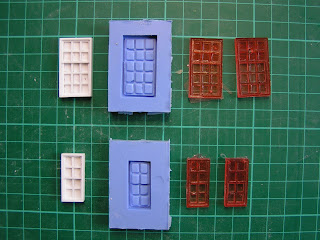 Excellent article. I've tried clear resin casting before, with mixed results. I'll have to look for these materials. What's the cost of Siligum & Fastglas resin?

I would have enjoyed meeting up with you at Colours - maybe next time.

You can also use Playdoh (children's moulding clay, but these are for one-off moulds as the mould will be destroyed when casting with resin and removing the finished casting.

(One final point, always cover the exposed resin - for example the back of the window castings as the resin goes off better in an enclosed mould.)

The resin is Fastglas and available from Halfords for about £6.00. You can also pick it up from motor or car factors for less.

The technique for resin casting in children's dough can be found in the soft-back book SCALE AIRCRAFT MODELLING GUIDELINES. Page 62 in an article called Child's Play Casting.

Great stuff Tony. That is such a neat, quick way of doing it. I have never heard of resin that cheap!

Is it noxious stuff?

And does it have to be Playdoh, or can one use Plasticene?

Haven't been here for a while, but great to read the latest.

"Great stuff Tony. That is such a neat, quick way of doing it. I have never heard of resin that cheap!

Is it noxious stuff?"

A. It does smell - but as I cast in the shed at the bottom of the garden, it's not too bad. Cheap resin can be bought in bulk - for example a school will use loads and if you have contacts, the costs can be very low. Check out local repair garages - who may sell it to you.

"And does it have to be Playdoh, or can one use Plasticene?"

A. this depends, the technigue I quoted, stated Playdough, this will allow some wrap-around. I use plastecene for making moulds, but the texture of Plastecene does not allow for the imprint of detail - it's too solid compared to Playdough - I hope this makes sense.

"Haven't been here for a while, but great to read the latest.