My immediate reaction was to start painting in anticipation of all ten rounds, but common sense finally got the better of me. I just have too much on my plate at the moment and to place myself under this much time pressure would be silly. Even so it was a close fought thing with imagined units of Flintloque Undead, Todoroni and even a set of Tolkien inspired figures planned.  However I have come up with a compromise one that I hope gives me the impetus to paint up a little more of my famed 'Lead Mountain'.

I PLEDGE that throughout 2012 I will model, base and paint ten groups of miniatures (between 5 and 10 figures) and record the results here on this Blog.  "My name is Tony Harwood and I AM a Wargamer!" 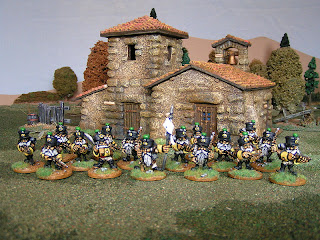 In addition to the promised Masterclass Articles on Barking Irons Online and various commissions I will start this pledge with another group of eight Flintloque Dwarves in February, some Undead Savant Bog Orcs in March and either Todoroni or Ferach for April. Other Pledge projects will include some Ostrian Hounds and even a dusty old box of Lowland Rats. Keep tuned-in for more details.

Where as I feel the Lead Painters League may be too much, particularly over the next two to three months a longer time scale and this list of stalled or old miniature painting projects is just the kick-start I need.

So, who's game for joining me. I suggest that we all have similarly stalled miniature painting projects - let's make 2012 the year that all that bare lead finally gets some paint!

The clock is ticking.

I like the idea. Whats the penalty if you fail? I certainly need to pull my finger out and paint fallshirmjager, US Paras, Apaches, F&I war. Count me in, I'll put an entry on my blog as a reminder to myself

Hadn't really thought of a penalty if I fail. But the total disgust and contempt of my fellow Bloggers should be enough to keep me on the 'straight-and-narrow.'

Either that or throw myself on their mercy!

Well you've convinced me I've signed up. Its in writing so can't get out of it now. Or I could delete the entry in a couple of months time if I don't keep up.

Just started my own blog, pretty much to try and shame myself into quarrying into that Lead Mountain. At the moment it's Normans for SAGA AND WWII sundries.

The only problem is that my Wife now wants a separate pledge that I'll fix the dripping tap in the kitchen and mend the fence!

Sounds reasonable - although I am hardly Mr DIY myself I have fixed a leaky tap in a few minutes and a fence sounds do-able. If that gives you the brownie points to spend all those happy hours on the hobby then that's a good deal.