The book was a gift from my Brother-in-Law, my Sister-in-Law and my Nephew and Niece from Hastings.  Thank you Dave and Fee.  It is a huge coffee-table book full of black and white images and over 300 pages full of interesting illustrations and notes.  According to the Official Ray Harryhausen Web Site this is the fifth book in the series written by Ray and Tony.

I had previously seen the Art of Ray Harryhausen in Waterstones and loved the illustration but at the time was not able to afford the list price. In addition I quite like the Ray Harryhausen's Fantasy Scrapbook all of which are detailed on the Official Web Site.

As a visual treat this was one of my favourite Christmas presents and nearly one month on, I still love to browse the images and text. Maybe it's just me but every image conjures up a childhood memory - King Kong, Jason fighting the Skeletons, the Kraken appearing from the sea or Talos coming to life. Great memories all well detailed in this great book. 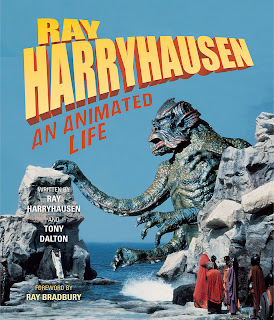 Any Google image search for Ray Harryhausen will reward you with hundreds of fantastic images.

I thought that I would finish this review with a short quote which can be found on the back cover of this book;

"...one of the world's great manipulators." Kermit the Frog

He brightened up my childhood.....

Wow, that sounds great. Harryhausen is one of my heroes.

Harryhausen movies were rather dull in their times, mainly because of poor scripts and, at best, average acting. However, compared to any recent adaption with lots of meaning- and soulless CGI junk (Clash of Titans, anyone?) these old flicks look utterly charming. A testimony was our "Jason and the Argonauts" participation game from last year, which was loosely based on the movie - and attracted many people just because of that.

So, good one, have fun with the book. And hopefully, the inspiration goes into another lovely modelling project as well.