My Pledge for April is this group of Savant Bog Orc Undead, the 1st Moldsk Guard, and the second Limited Edition Unit (or LEU) from Alternative Armies.

Unfortunately this particular set of 16 Undead Bog Orcs is no longer available having been fully sold out some time ago.  My particular set has sat undisturbed on my too-do shelf for some time and I thought it was time that I based and painted them.

Photo One - Is taken from the Alternative Armies Web site and shows the official box set. My intention is to paint a unit of eight miniatures in similar, but not identical uniform colours.

Photo Two - Shows some of the miniatures based on 2p coins. The groundwork is built up from Milliput. You may also be able to see odd bits of Green Stuff. Even though I was the original sculptor (actually converter is a better description) I felt there were some areas where I needed to add too. 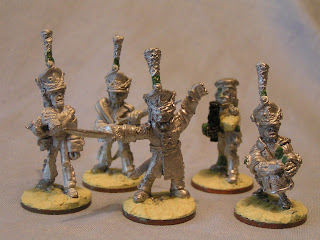 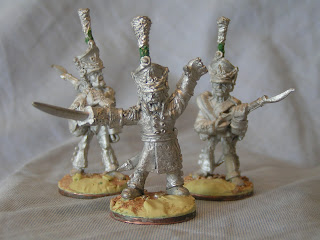 Photo Four - One of my favourite characters from the set, the musician. 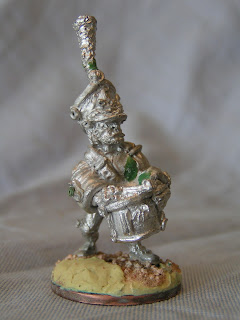 Photo Five - I damaged the flag pole on my original standard bearer and thought that I would re-sculpt the figure.  I have added a blunderbuss and hand from a Dwarf miniature to his right hand and re-modelled the left arm with Green Stuff to hold a much sturdier flag pole. 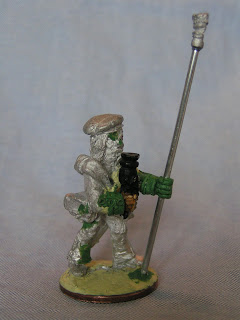 At long last I am getting around to painting this set. More to follow.

Undead bog orcs, I hadn't heard of this set! I'm looking forward to seeing these progress.