SNUFF by Terry Pratchett, the 39th Discworld novel. Pratchett back to his very best, with characters that are as familiar to me as my own family. Samuel Vimes, Lady Sybil and the rest of The Watch in a story that just bounds along from the first to the last page.

Having criticised Unseen Academicals as being a little 'woolly' and difficult to read this and the previous book I Shall Wear Midnight (which is apparently 'for younger readers) has restored by love of Terry Pratchett. I found myself much more at home with this story.

"Commander Samual Vimes of the Ankh-Morpork City Watch is on holiday in the pleasent and innocent countryside. But not for him a mere body in the wardrobe. Rather, many, many bodies - and an ancient crime more terrible than murder." 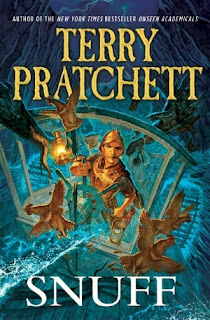 The humour is back to the-laugh-out-loud style I so much enjoy. The puns and jokes are so obvious that if they were to rise in the East and set in the West, they could not be any more clear.  Well done for a great yarn.

As I write this short review, I keep wondering if there will be any City Watch films and who will play Sam Vines - any ideas?

I loved it as well, the guy from the Sopranos...James Gandolfini?

Fantastic, I have it waiting to read on my bookshelf! Unfortunately I have only read one or two of his books, regardless of owning them all!!!

I agree with you, certainly a return to form. I think that there was an interview with Terry Pratchett where he said that he always saw Vimes as the late Pete Postlethwaite - I quite like James Purefoy (Solomon Kane) as Vimes

I think I might go with Philip Glenister (Life on Mars and Ashes to Ashes).

I don't see Vimes as big and brawny - more like Postlewaite.

Vimes is Clint Eastwood, through and through. Just a shame the man himeslf is becoming a bit long in the tooth to actually play the role.

Oo, might read this next then. I reckon Sean Bean would make a good Vimes. Or Jason Isaacs (look him up!). Although it's a difficult one - Sam Vimes is just Sam Vimes I guess!

Oo and Tim is right - James Purefoy would be good too.

This has started me thinking - Lesley Nichol IS Mrs Ogg. Or Miriam Margolyes?

And what about Vetinari!?