Oswald, the Pledge for July 2013 is finished. I've given the miniature a coat of Ronseal Gloss varnish and a couple of further coats of Galleria Matt varnish before adding some static grass to the base. 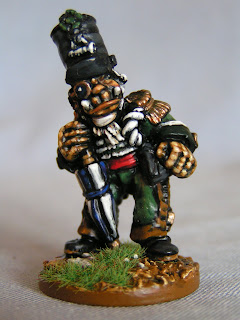 Photo Two - the finished figure from a different angle. (I have noticed that I missed the skull above the bugle on the Shako. It should be silver). 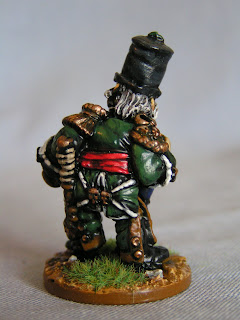 Photos Three and Four - I thought it would be of interest to post these two images. The first shows the original purchases, bought at a bring-and-buy table at Alumwell earlier this year. Both figures were mounted onto Balsawood bases with simple railway scatter for ground cover. I paid 50p for each model. 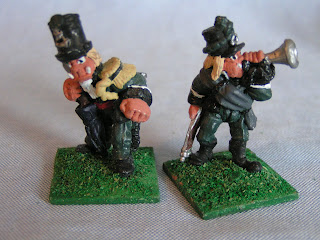 Here you can see the two minis. Now mounted onto my preferred 2p coins with the bases built up with Milliput. The Oswald figure has been stripped of paint by soaking in a tub of Dettol while the bugler was simply painted over.  Both figures were painted over a Black undercoat and followed the colour scheme show on the front cover of Days of Daring, a Commando war comic number 3765, for details see this link. 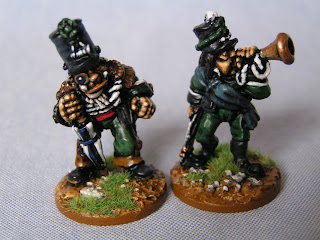 Just one figure/character to go and the group of eight miniatures will be finished. 'The Fighting Forty-Firsts'.

Quite a nice transformation. And don't you just love finding spots you missed with close up photography? Grr.