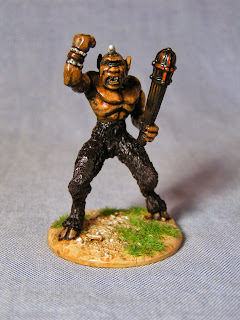 The latest monster for my 40mm Typhon or Greek Mythology gaming project is this Cyclops figure from a company called Grim Reaper which was bought from Spirit Games in Burton.

The model is built on a 40mm metal washer with the groundwork built up from Milliput. I had to modify the bottom half of the metal figure as the legs were set too far apart for the base. I cut out a section of metal base and squeezed the two legs together before glueing them to the base.

The Cyclops monster stands 50mm tall to the top of the horn and came as a two piece casting (the left arm and club are separate).

This final image shows the Cyclops alongside a Spartan Miniatures 40mm Greek Hero, note that I have repainted the shield motif on this figure since it was last featured on this Blog.

The painting was built up over a Black basecoat with lots of drybrushing and washes. A very simple and quick paint job! 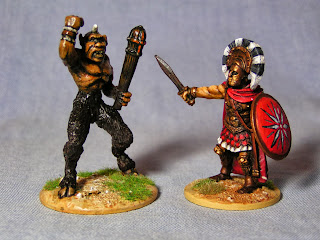 Nice work. He seems like he would work even better with smaller figures, so he could be used in a large range of games... which is ideal for a monster I feel.