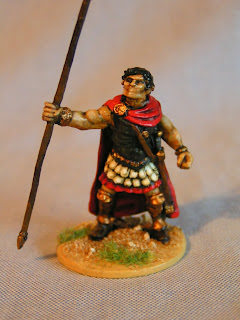 I'm kicking-off October with this converted Greek Hero from Spartan Games, part of their 40mm Heroes of Sparta range that I believe is now out-of-production. I have used the unaltered body with the large spear option and the head from the Foundry Sky Elf which was picked up off e-bay and spare after my 40mm Hawkmen conversions for Flash Gordon.

I choose not to add a shield, preferring to leave the left arm bare. The miniature is mounted onto an old fashioned 1d coin with the groundwork built up with Milliput and fine sand. 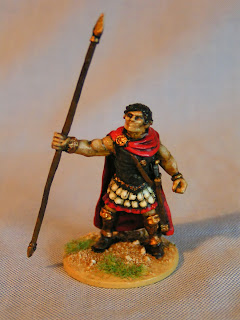 I was lucky enough to pick up quite a few of these 40mm figures, including the composite set of five soldiers and even more skeletons for this Typhon gaming project, this very slow and long term gaming project. Over the next couple of weeks, I have one more Typhon miniature to post details of, then a couple more Flash Gordon figures before getting back to my On-Line Builds as detailed in earlier posts.

Typhon in 25mm is on my list of things to do one day. Must say I've gotten nowhere with it though.

Looking forward to enjoying you progress on this project!!