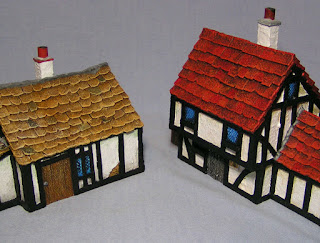 Over the past twelve months I have been wanting to spend time on this new project - Oldehammer buildings or terrain. The idea was first mooted back at Alumwell last March and although I have been looking at suitable inspiration and even checking out some old Games Workshop card buildings, other projects have always taken priority or needed finishing for one deadline or another.

Over the Christmas and New Year period, I committed to getting some modelling done and I shall be detailing progress on this Blog from February 1st.

The image above shows a teaser - the first two Oldehammer style buildings very much inspired by the GW Bloodbath at Orcs Drift card buildings.

The style is purposely naive and harks back to a series of card buildings I built over twenty years ago. In fact the two buildings featured have been built by me three times. The first following similar techniques and painting styles back when I used to play Warhammer (1st and 2nd Edition), the second set was built to a different scale - to fit in with 15mm Orcs from Grenadier (now long OOP) and these - the third incarnation.

Not sure, I have enjoyed building (and painting them), but feel my skills have moved on and I know that I am now able to produce much more detailed and accurate models, however there is a lot to be said for 'Going Olde Skool' so who knows, maybe I'll make them available as resin models.

Look out for the first update on Monday.

Nicely done and they look great.

Those take me back.
Orc's drift one of the best scenario books ever produced. :-)
Cheers
Stu

Very cool - looking forward to seeing where you take this...