Oldehammer Building No.1 - part one 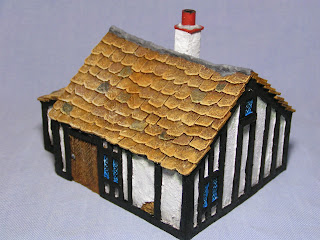 As I have already stated in my earlier post, this is a project that I have wanted to work on for some time.

Oldehammer Building number one - The Construction.

Image Two - Shows the Games Workshop card building from Bloodbath at Orcs Drift - the inspiration for this model. I have not used the original card model, but have built a completely new 3D version from foamboard and scrap card. 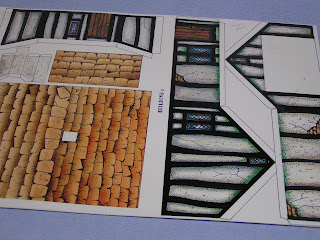 Image Three - The core was constructed from some spare foamboard and thin card (the backing card of an A4 note pad) with the corners strengthened with strips of newspaper. Construction was done with uPVA glue with the edges re-enforced with dressmakers pins. Anyone familiar with early Games Workshop/White Dwarf construction articles will know what I mean. 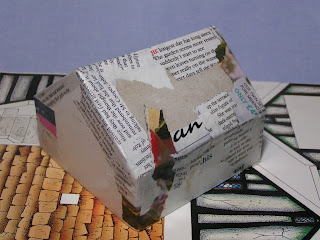 Image Four - The wooden beams were again constructed from scrap card. I used 2.5mm thick backing card from an artists sketch pad. Once again the construction was carried out with uPVA glue. 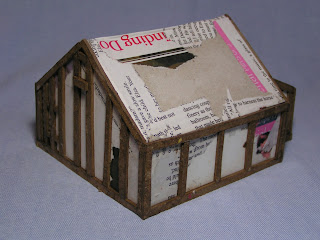 Image Five - The foamboard core and newspaper strips make quite a strong core box, but I have also added foamboard strips to the interior to make sure that this model maintains it's shape and lasts. 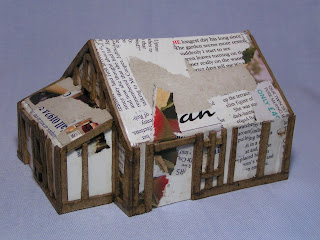 Image Six - The roof tiles were cut from some card that I found in the garage. I believe it was the backing card from some picture frames. I have added each roof tile individually and made sure that the edges have been weathered by trimming small chips from the exposed edges. A time consuming process, but well worth it. 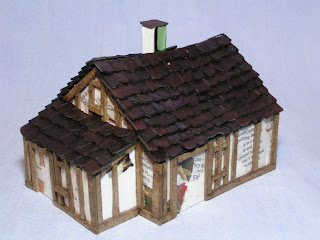 The chimney was two thin strips of foamboard wrapped in newspaper with a small square of card on top.

The next stage is texturing.